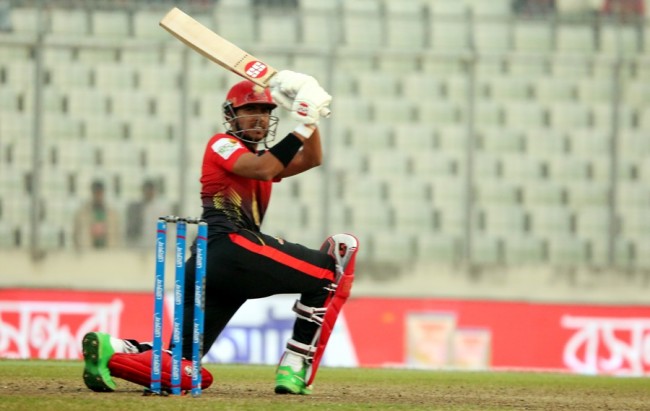 With Soumya Sarkar leading the side to a victory against Sylhet Thunder from a tricky position, Cumilla Warriors captain Dawid Malan found his game sense improved a lot better than the past.

Malan himself shared a 72-run with Soumya for the fourth wicket stand after his side found them in tittering 32-2 in the chase of Sylhet’s platry but tricky 141-5.

In other day’s Soumya used to throw away his start, leaving the side in further troublesome situation but on this day, he not only played his part well but also he held together the innings after the departure of Malan. He eventually struck 52 not out off 30 and brought up the victory with a boundary of long-off region.

Malan said, the target was tricky but Soumya’s game sense was key in bailing them out of the danger.

“He did fantastically well. To me, he was the man of the match,” Malan said on Tuesday after Cumilla won the game by five wickets.

“The way he played today, he was the only one with a strike rate of 120-130+. He came out in a really tough time, when we were in big trouble, our scoring rate was four per over, he came in and played a very mature innings. So I think that is a very good learning curve for him. Especially because he is batting out of position. He batted at no.5 today where he usually bats at the top three or four in his career. So the way he came out and played today, if I was a guy watching from the outside, if I was watching it from a coaching point of view, I think he has improved so much and he is learning the game, his thinking about the game is brilliant.”

Malan also praised the bowlers to give them a small target in tricky pitch.

“The way our bowlers bowled today in that wicket, the areas we struggled with the bowl this tournament within the first six overs and the last four or five overs. So, the way we bowled today was fantastic. The boys were very understanding of what they wanted, to restrict them to 140 was fantastic. Was probably a 150-160 wicket, so to restrict them to 140 was very good,” he said.

Ahead of the game, Cumilla mad a tough decision of dropping Sabbir Rahman as the batsman has been going through a bad patch with batting.