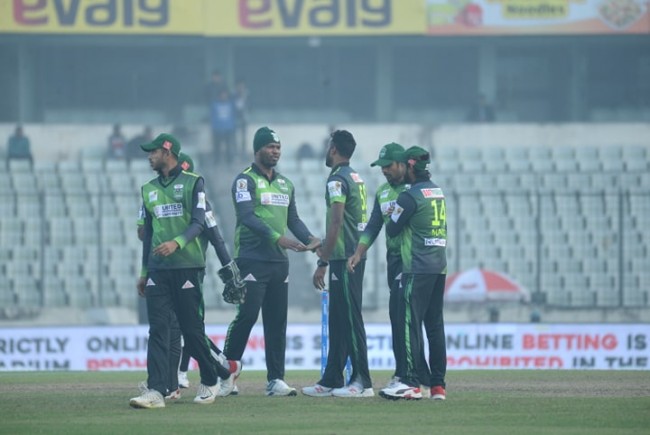 Sylhet Thunder captain Andre Fletcher feels the performance by his team in Bangabandhu Bangladesh Premier League (BBPL) is ‘disgracing’ as he believes that they can’t do the things in proper way.

Sylhet bowed out from the tournament with 11 defeats from 12 games and their lone victory came against Khulna Tigers in their fifth match.

The West Indies recruit however cut a forlorn figure, saying that the performance was such disastrous that they were simple unable to resist the rot.

“Any captain will be upset, but what can I do? It’s just our disgracing performance by the team,” Fletcher said on Tuesday after his side ended the campaign with a five-wicket defeat to Cumilla Warriors.

“As I said in the previous interview that it's just for us to know look at the things done, we could bounce back in bowling and batting. We can judge ourselves and know what's next to be done. I will go back home and work on it,” he added.

When it was expected that they would break the defeat jinx in their home venue Sylhet, they lost three matches in consecutive three days to make the thing worse.

Fletcher refused to blame the fixture of the tournament as they played three days in a row in Sylhet.

“It's professional cricket, whether we have three back to back games or we have two, that doesn't matter. We came here to play cricket, not make a party, so as I said it doesn't matter, the schedule is perfect,” he remarked.

He also refused to blame the Sylhet wicket which looked not up to the mark, at least like in Dhaka and Chattogram.

“To be honest for the last three games. We have always been saying that Sylhet has the best wicket in Bangladesh. This time it was a bit opposite. Apart from Chittagong Dhaka has proven to be better than Sylhet this year, but Sylhet has been the perfect wicket in the last three years as I said, but the bowlers, not only the spinners used to bowl lot in Dhaka. Right now, the spinners are putting extra effort which is good for cricket. The wicket has improved. Hats down to the ground staffs. I think they did a tremendous job, hope that they can continue this,” he concluded.