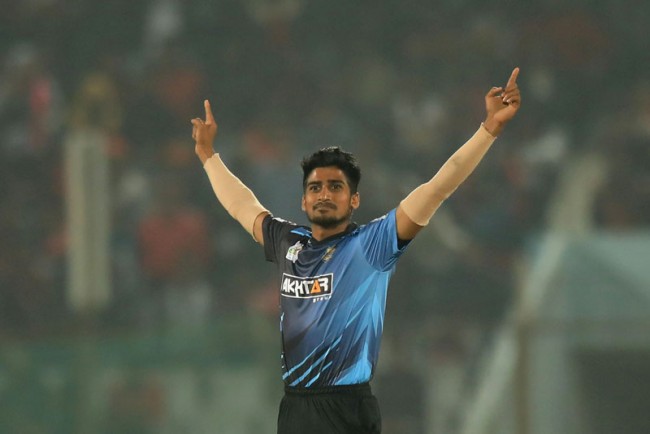 Fast bowler Mehedi Hasan Rana who rose to the fame in the ongoing Bangabandhu Bangladesh Premier League (BBPL), showing intriguing bowling performance said he just kept the things simple and bowled according to his strength.

He added that the simple mantra gave him the success in the tournament, an event in which he was craving for a chance to play.

“When I bowl, I don’t think who is the batsman in the crease and what’s his name—whatever he is Hashim Amla or other. I just concentrate on to bowl according to my strength and by doing so, I am getting the success here,” Rana told the reporters on Saturday after his side Chattogram Challengers’ six-wicket win over Khulna Tigers.

Rana claimed 3-29, that also included the wicket of Amla to lead the side to the victory. In a helpful wicket, he moved the ball admirably to slice Khulna’s top order and set a platform for the other bowlers.

Later Rubel Hossain joined the party, snapping up 3-17 to play a perfect foil to Rana.

He believes bowling in partnership was key to his success in his match.

“One player can’t win the match all by himself. Bowling in partnership is important. As a partner of my bowling, Rubel Hossain brought us the breakthrough and then Nasum bowled in economical way. Their bowling eased my task,” Rana remarked.

His three-wicket haul however helped him to reclaim the top spot of bowling as he took his wicket-tally to 17, overtaking Mustafizur Rahman’s 16.

But he is not thinking about how many wickets he is getting rather he thinks as to how he could eclipse him performance in every match.

“I am not counting my wickets. I am taking it match by match and thinking about how I can do well in every match. Whether Mustafizur or other surpasses me, is not in my mind,” he disclosed.

Mehedi Hasan Rana said he was waiting for his chance and when it came he doesn’t want to look back.

“I was same before the BPL but didn’t get that much opportunity. I was waiting for my chance. I kept me prepared for that and that’s why result is coming,” he pointed out.

“What happened in the past, I don’t want to think. I just think what I have to do in the future and I am trying to grab the opportunity with both hands.”