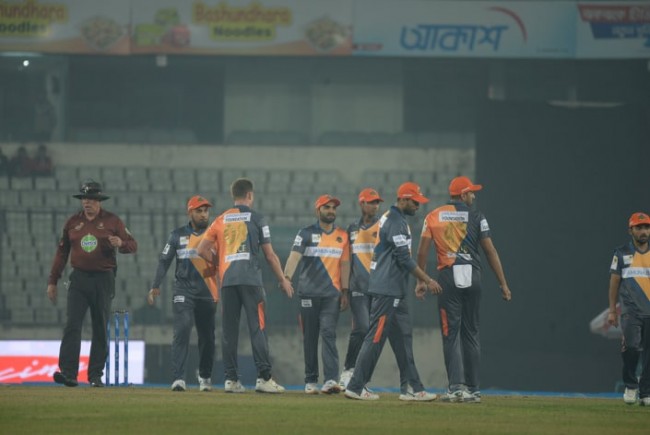 Mushfiqur kept Khulna in the hunt with a courageous batting until Hasan Mahmud forced him to top-edge a delivery and rescued Dhaka from the scare.

The Khulna captain eventually was dismissed on 64 off 32 after smashing six fours and four sixes as his side was restricted to 160-8 in response to Dhaka’s 172-4.

Having won the match, Dhaka went atop of the point table with 12 points, same as Rajshahi Royals and Chattogram Challengers but edged both of the sides by net-run-rate.

Hasan Mahmud indeed was the wrecker-in-chief, claiming his career-best 4-32 that also included the prized scalp of Rilee Rossuw.

Mahmud then sliced the top order, rattling the stump of Mehidy Miraz for 15 and dismissing Rossouw (15) with a delivery that swung lately to take the edge.

Pakistan recruit Shadab Khan in between rocked the Khulna batting further with the wicket of Shamsur Rahman Shuvo (3) to leave them at tittering 44-4.

Mushfiqur resisted with the able support from Najibullah Zadran as the duo shared 56-run for the fifth wicket.

Zadran’s run-out on 31 made Dhaka favorite to win the match heavily. But Mushfiqur refused to give up as he launched a spectacular attack on Dhaka bowlers to keep the side in the hunt.

However Hasan Mahmud ruined Khulna’s hope completely after Mushfiqur top-edged a short delivery to be dismissed.

Pakistan recruit Asif Ali gave Dhaka Platoon a late impetus, smashing a 13 ball-39 not out, which steered them to a respectable total.

The match was delayed by 40 minutes due to the overnight rain and wet outfield after which Khulna won the toss and elected to bowl first.

But Tamim Iqbal and Anamul Haque Bijoy kept Dhaka flowing before Mohammad Amir broke through with the wicket of Tamim Iqbal who made 25 off 23 with three fours and one six.

Tamim’s dismissal brought an end to the 45-run partnership between him and Bijoy.

Shafiul Islam troubled Dhaka further, getting the better of Bijoy for 15 after which Aminul Islam Biplob dismissed Mahdei Hasan for 1 to leave them 62-3.

Mominul Haque and Ariful Haque resisted the rot but Khulna bowlers maintained a nagging line and length to stifle Dhaka for runs.

Amir returned to his second spell to break the 56-run partnership between Mominul and Ariful, removing the former for 38.

As it looked Dhaka would end up a mediocre total, Asif Ali came up with fire to make the Khulna bowlers disarray.

After his arrival, Dhaka scored 54 off just 21 deliveries with Asif own blasting 39 not out of just 13. He struck two fours and four sixes in his knock to help Dhaka reach a position from where their bowlers did get something to defend.