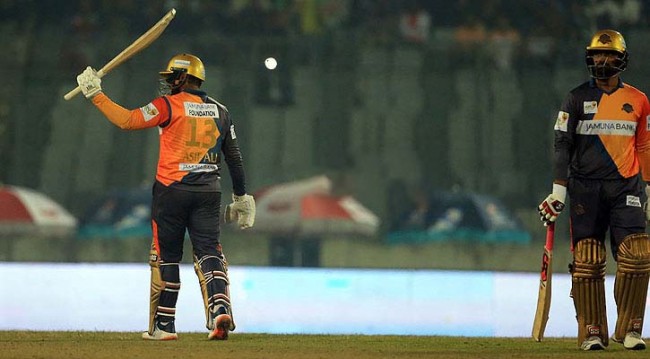 Pakistan recruit Asif Ali gave Dhaka Platoon a late impetus, smashing a 13 ball-39 not out, which steered them to a respectable 172-4 against Khulna Tigers in their ninth match of the Bangabandhu Bangladesh Premier League (BBPL) at the Sylhet International Cricket Stadium on Friday.

The match was delayed by 40 minutes due to the overnight rain and wet outfield after which Khulna won the toss and elected to bowl first.

But Tamim Iqbal and Anamul Haque Bijoy kept Dhaka flowing before Mohammad Amir broke through with the wicket of Tamim Iqbal who made 25 off 23 with three fours and one six.

Tamim’s dismissal brought an end to the 45-run partnership between him and Bijoy.

Shafiul Islam troubled Dhaka further, getting the better of Bijoy for 15 after which Aminul Islam Biplob dismissed Mahdei Hasan for 1 to leave them 62-3.

Mominul Haque and Ariful Haque resisted the rot but Khulna bowlers maintained a nagging line and length to stifle Dhaka for runs.

Amir returned to his second spell to break the 56-run partnership between Mominul and Ariful, removing the former for 38.

As it looked Dhaka would end up a mediocre total, Asif Ali came up with fire to make the Khulna bowlers disarray.

After his arrival, Dhaka scored 54 off just 21 deliveries with Asif own blasting 39 not out of just 13. He struck two fours and four sixes in his knock to help Dhaka reach a position from where their bowlers did get something to defend.