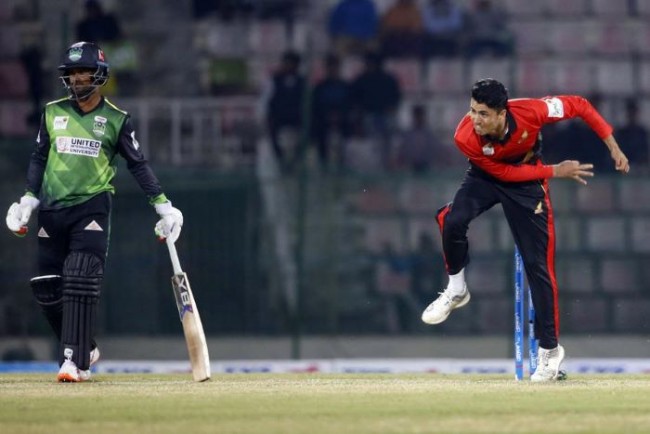 In a match that eventually turned out to be the most intense battle the BPL has ever seen in its history, Cumilla prevailed in a dramatic way against a never-say-die Sylhet Thunder to keep their play-off hopes alive.

Desperate to end their defeat-jinx to give the home crowd a victory at least, Sylhet fought neck-to-neck before losing it in the first Super Over of this tournament at Sylhet International Cricket Stadium on Thursday.

The match was tied after some intense battle before it went to Super Over, which was also eventful as it kept testing the nerve of the two teams.

Sylhet batted first in the super over and their batsmen duo Andre Fletcher and Sherfane Rutherford were able to score just 7 runs in Mujeeb-ur-Rahman’s over. Mujeeb-ur-Rahman earlier claimed his career-best 4-12 and inflicted a crucial run out to keep Cumilla alive in the match.

Cumilla though lost Somuya Sarkar in during the chasing in Super Over, bowled by Sylhet’s Afghanistan recruit Naveen-ul-Haq, finally won it thanks to David Wiese who overhauled it, holding his nerve in sheering adrenaline-pumping moment.

The victory was Cumilla’s fourth victory in nine matches, which kept them in the fifth position of the point table.

Sylhet was expected to change their fortune, bolstered by the home crowd in their first match at the home and when they restricted Cumilla to 140-9, things looked to go on according to the script.

But the match was spinning like a pendulum and ended in a tie as Sylhet who needed 15 in the last over, failed to score the required two runs in the last ball.

Left-arm spinner Sunzamul Islam broke through for Cumilla in just second ball of the innings, getting rid of big-hitter Johnson Charles for naught and the wicket came up as a much stimulation to win the game even from the hopeless situation.

And Cumilla kept striking with Mujeeb-ur-Rahman taking out Rony Talukdar for 2 in the next over. Mohammad Mithun and Sherfane Rutherford kept the chase alive before Al-Amin Hossain came up with double strike as he removed both of the batsmen in his first over, leaving Sylhet to a tittering 33-4.

The big blow came three balls in the next over when David Wiese got rid of Andre Fletcher, the captain of Sylhet in absence of injured Mosaddek Hossain Saikat, for 1, making it five down for 33 runs.

With play-off hope on the line, Cumilla refused to give up the hopes as they came back in style thanks to Mujeeb-ur-Rahman who claimed three wickets in 17th over including of Sohag.

Gazi after taking 2-23, smashed his career-best 30 ball-52 with three fours and four sixes.

As it looked Cumilla almost sealed the deal, drama unfolded then with Monir Hossain and Naveen-ul-Haque playing some unorthodox shots to tilt the momentum towards Sylhet again.

Sylhet however needed 15 runs to win in the last over and they again looked to win it before Naveen was trapped run out. However Ebadot and Monir then somehow managed to tie the game.

Mujeeb who inflicted the run-out on Monir (16) to deny Sylhet the victory ended with career-best 4-12.

West Indies recruit Sherfane Rutherford and pacer Ebadot Hossain were to the fore, finishing with three scalps, giving away 19 and 33 runs respectively.

Sohag Gazi however removed Tharanga for his team’s highest 45 and ruined their hope further to make a bigger score.

Ebadot and Rutherford did the rest of the damage as they wrecked-havoc in middle order and lower order in joint venture to make Sylhet heavily favourite to win the game.

Already eliminated from the play-off race, Sylhet was playing to restore some pride but they ended up with another defeat, albeit after intense battle.