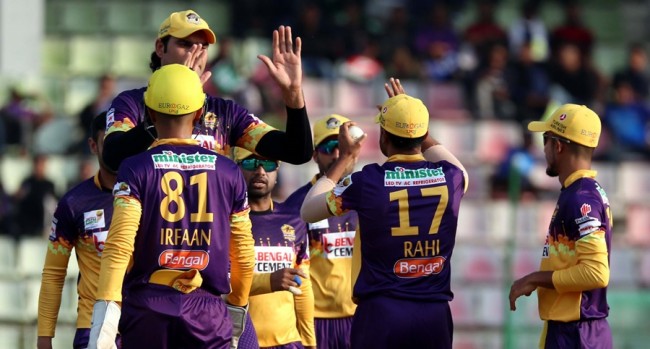 Ending their two-match defeat streak, Rajshahi Royals secured an emphatic 30-run win over Rangpur Rangers and by doing so propelled them to the top of the Bangabandhu Bangladesh Premier League (BBPL) point table at Sylhet International Cricket Stadium on Thursday.

Rajshahi’s point is now 12 in nine matches, same like Chattogram Challengers but they edged the port city team by net-run-rate. Rangpur Rangers however literally had no hope to play the play-off after their sixth defeat.

Being sent to bat first Rajshahi congregated a hefty 179-4 before their bowlers bowled in disciplined way to restrict Rangpur to 149-7 and helped them take the revenge of their 47-run defeat in the first-leg match.

Shoaib Malik, who led the side in absence of Andre Russell, put up a sterling all-rounder performance, scoring 37 and taking 2-27 to hasten the victory.

But it was Ravi Bopara whose 29 ball-50 not out gave Rajshahi the total that looked safe to win it.

Bopara in fact was the key in taking the side to reach a position from where it was eventually easy for them to register the victory in the first match of the Sylhet Part of BBPL.

Liton Das and Afif Hossain gave the side a decent start after being sent to bat first but neither of them could count their start.

Liton was dismissed on 19 off 15, sending the ball across the rope thrice before Afif followed him in the next over, with 17 ball-32, studded by two fours and three sixes.

Shoaib Malik then held together the innings in the middle, making 37 off 31 with four boundaries.

As it looked Mustafizur would strangle them with his typical death over bowling, which was full of his traditional weapons slower and cutters, Ravi Bopara found the way to keep the scoreboard flowing.

And in the process he reached his half-century in the last over, hitting three fours in a row in the last three balls. Alongside him, Mohmmad Nawaz was not out on 15 off 9 deliveries.

Mustafizur finished with 2-41 in four overs while Arafat Sunny and Mohammad Nabi took one wicket apiece.

Captain Shane Watson continued his poor form, falling to single-digit figure for the consecutive fourth time as Rangpur made a bad start to the chase.

Naim Sheikh however continued his good form but failed to continue the sustained onslaught and was dismissed for 18 ball-27, hitting two fours and as many sixes.

Shoaib Malik was the wrecker-in-chief, as he got rid of dangerman Cameron Delport for 14 before taking the prized scalp of Naim.

Being reduced to 47-3, Rangpur never could raise the prospect of winning the game even though Tom Abell (29) and Fazle Mahmud (34) shared a 64-run for fourth wickets stand. Both of the set batsmen however got dismissed in the space of three balls to ensure Rangpur’s defeat.  Al-Amin Hossain later made 18, only to reduce the margin.