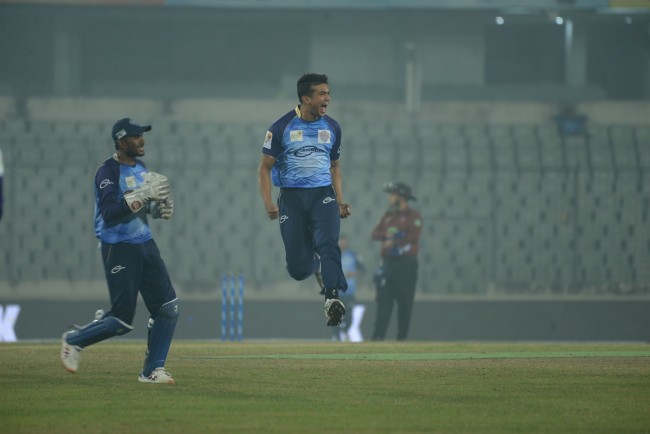 A well-composed half-century from Naim Sheikh was well complemented by a rollicking bowling performance of fast bowler Taskin Ahmed as Rangpur Rangers thrashed mighty Rajshahi Royals by 47 runs in the Bangabandhu Bangladesh Premier League (BBPL) at the Sher-e-Bangla National Cricket Stadium on Tuesday.

Naim struck his second half-century in the tournament which saw Rangpur compiled a hefty 182-6. Taskin Ahmed then ripped through the batting with a sensational bowling as he claimed 4-29 to restrict Rajshahi to 135-8.

Put into bat first, Naim set the platform of big total, smashing a 47 ball-55 that included six fours and one six. He was ably supported by Cameron Delport’s 31 off 17 and Lewis Gregory’s 17 ball-28.

Jahurul Islam Omee struck an unbeaten 8 ball-19 towards the end to help the side post a total that looked formidable.

Captain Shane Watson (7) however continued his poor run of form in the tournament and fell for single digit figure for the third time in a row.

It mattered little as Naim and Delport shared 54-run for the second wicket stand to steady the ship. Delport clobbered three fours and two sixes in his knock before being dismissed by Afif Hossain.

Naim then followed his suit after being removed by Kamrul Islam Rabbi but by then Rangpur got the platform of a big total.

Even though Mohammad Irfan sparked a collapse in the middle order, Al-Amin Junior (15*) and Jahurul Islam Omee took some big shots to help the side end on a good note.

While it needed a fluent start to gun down such big total, Liton Das and Afif Hossain failed to pace the innings, which eventually increased the asking run rate.

Pace bowler Taskin Ahmed then caused the havoc as he firstly broke through with the wicket of Afif (7) before dismissing Liton for 15 and Shoaib Malik (0) for consecutive deliveries.

That tripe strike indeed broke the spine of Rajshahi’s batting, leaving them a tittering 51-3 in ninth over.

Alok Kapali and Ravi Bopara resisted to give Rajshahi a glimmer of hope, which was shattered after Lewis Gregory dismissed both of them.

Kapali was the highest scorer with 31 while Bopara made 28. Still Rajshahi pinned hopes on captain Andre Russell because of his reputation to snatch the game from the jaws of the defeat.

Russell began with bang, hitting two sixes in his first four balls but an unfortunate run-out of him after 7 ball-17 completely ruined Rajshahi’s hope. The rest of the batsmen then just reduced the margin.