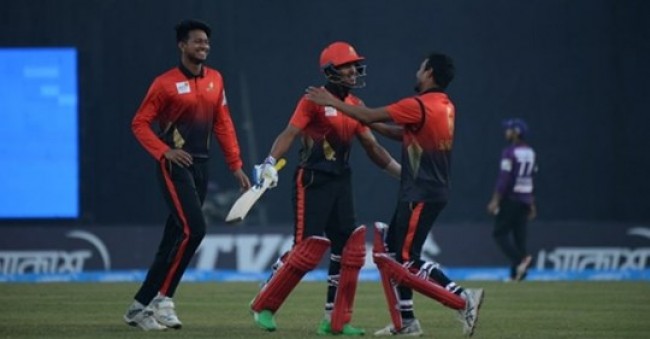 Having won the game, that went down the wire, Cumilla clinched its third victory and kept them alive for the play-off race. Chattogram still sits atop but the position could well be ruined if Rajshahi Royals win their game against Rangpur Ranger's latter today under the lights at the same ground.

Being sent to bat first, Chattogram was held back to 159-6 and Cumilla reached the victory mark by making 161-8 in the last ball of the game.

Despite it looked an inform Dawid Malan would make it a cake-walk for Cumilla, the game was decided in the last ball. Malan who smashed 51 ball-74 with five fours and four sixes was trapped run out in the penultimate delivery, leaving Cumilla a requirement of three runs in the last delivery.

Malan held together the innings after Stiaan van Zyl provided a quick start. But van Zyl’s dismissal after 12 ball-22, saw a collapse which Malan stalled and kept the side flowing.

When Malan looked unfazed by all kind of bowling attack, Chattogram quietly ripped through the Cumilla’s middle order as Soumya Sarkar (6), Sabbir Rahman (18) and David Wiese (1) failed to give Malan support.

However the much-needed support came surprisingly from Abu Haider Rony. With 16 runs requiring to win in the last over, Rony launched spectacular attack on Plunkett to hit a six and boundary in consecutive deliveries to bring down the equation to 4 off 2 balls.

As it looked it was Cumilla’s game, drama unfolded as Malan was trapped run-out, trying to steal two runs. But Mujeeb-ur-Rahman finally made it Cumilla’s day after a see-saw battle.

Chattogram Challengers failed to capitalize on the start provided by the openers and restricted for a total that always looked below par.

Opener Lendl Simmons and Junaid Siddique combined for a 103-run partnership in just 12th overs to give an indication of making a big total.

The dismissal of Simmons for 34 ball-54 at the hands of Soumya Sarkar sparked a sensational collapse.

Simmons struck five fours and two sixes in his knock, which was highest for Chattogram.

In the next over, his fellow opener Junaid Siddique was trapped run-out for 45 after hitting six fours in 37 deliveries.

Sohan led the side in absence of Imrul Kayes who couldn’t play due to his sickness and got dismissed at a moment when his service was badly needed.

As it looked, Chattogram could be held back for below 150, their Afghanistan recruit Zia-ur-Rahman blasted 21 ball-34 not out with four sixes to give the bowlers something to defend.

Soumya Sarkar was the wrecker-in-chief with 2-20 in four overs while Al-Amin Hossain, Sunzamul Islam and David Wiese took one wicket apiece.