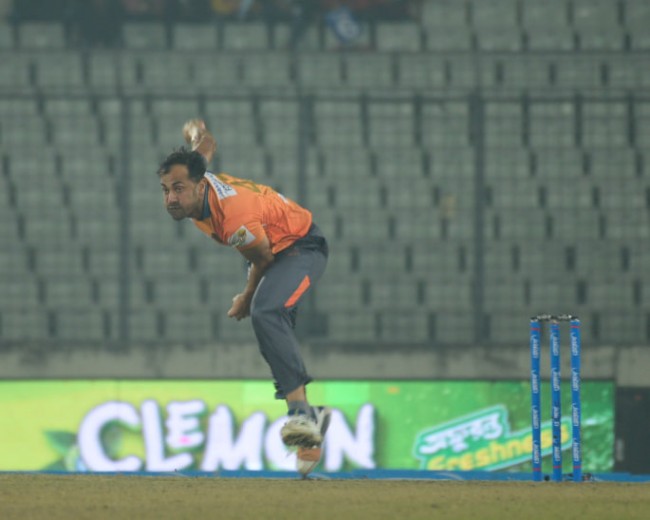 While the clash between Dhaka Platoon and Rajshahi Royals in Bangabandhu Bangladesh Premier League (BBPL) was considered to high-voltage match given the strength of the two teams, it turned out to be a one-way traffic after Wahab Riaz gave a talismanic impetus to script Dhaka’s facile 74-run victory at Sher-e-Bangla National Cricket Stadium on Monday.

The Pakistan recruit claimed his career-best 5-8 to single-handedly bring down the most consistent team Rajshahi to the earth.

Half-centuries from Tamim Iqbal and Asif Ali gave Dhaka Platoon a competitive 174-5, which Wahab Riaz made more than enough by dismissing Rajshahi for 100 runs in 16.4 overs.

Wahab made the eventual difference with a triple strike in his first over, that went for maiden, at a time when Rajshahi began with bang in pursuit of the target.

This was Rajshahi’s only second defeat in seven games that demoted them to third position from second. Dhaka though sat at fourth position, their fifth victory kept them on par with Khulna Tigers and Rajshahi as far as the points are concerned.

While Wahab was on fire, wicket-keeper Jaker Ali Anik who was substitute glove-man for injured Anamul Haque Bijoy quietly took six catches behind the wicket to make a new wicket-keeping record in BPL history.

Being sent to bat first, Dhaka’s start was stark contrast to how they finished eventually. Tamim Iqbal batted throughout the innings to remain unbeaten on 52 ball-68 with four fours and three sixes. Asif Ali later provided the late impetus, blasting a 28 ball-55 not out with four fours and as many sixes.

Amid the slow start and regular wickets’ tumbling, Tamim held one end with utmost patience though at times he looked to be slower than needs, given the merit of the bowling. Tamim’s slow approach was key in slowing down the innings at the half-way stage but at the same time, his presence ensured Rajshahi bowlers would not do more carnage.

The Rajshahi however dug their own graveyards by showing a wretched fielding that gave Tamim and Asif Ali reprieve twice.

Asif Ali’s arrival gave Dhaka the pace they needed. He came down heavily on the bowlers as Dhaka scored 62 runs in the last five overs to make the total a reasonable one. Apart from Tamim and Asif, the notable contributor was Mahedi Hasan who scored 11 ball-21.

Rajshahi started in whirlwind fashion in their quest to win the prestigious clash, with Afif Hossain and Liton Das giving the early impetus. As they scored 39 runs in just three overs, it looked Rajshahi was on their way to make it one-way traffic.

But the introduction of fast bowler Wahab Riaz changed the whole complexion of the game. Swinging the ball admirably, Wahab dealt a triple strike in his first over, including the wicket of Liton (10, Alok Kapali (0) and Shoaib Malik (0), to leave Rajshahi in disarray state from which they could never recover.

The situation worsened when Lewis Recce removed Afif for 23 ball-31 and the match was virtually over as Hasan Mahmud moved one sharply to find the edge of Andre Russell for 7. Russell’s wicket made Rajsahi six down for 76 runs in 11th over.

Wahab then came back again to clean up the tail and completed his five-for.