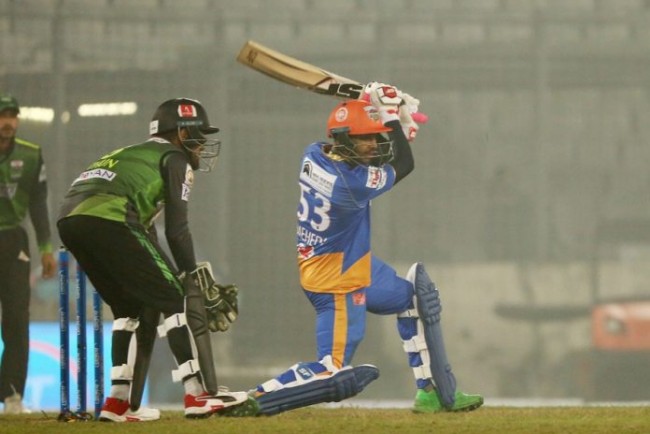 He struck his career-best 62 ball-87 not as Khulna reached 158-2 in 17.5 overs to register their fifth victory in seven matches after the bowlers restricted the Sylhet to below par 157-4.

Miraj smote nine fours and three in the knock which was his only second half-century in his T20 career.

This was a kind of sweet revenge for Khulna who tasted an 80-run defeat to Sylhet in the first meeting of a double-league tournament. The victory, however, remains Sylhet’s only victory in the tournament so far.

Miraj and Nazmul Hossain Shanto combined for a 115-run in 12.2 overs for the opening stand to make it one-way traffic. When it looked, Khulna set for an all-wicket victory, the partnership was broken as pace bowler Ebadot Hossain removed Shanto for 31 ball-41 in which the batsman hit five boundaries.

But Miraj decided to stamp his authority as he kept hitting all things out of the park and took the side home, with the support from Rilee Rossouw and skipper Mushfiqur Rahim.

Rossouw made 16 while Mushfiqur Rahim was not out on 4. Sherfane Rutherford and Ebadot took one wicket apiece for Sylhet.

Sylhet Thunder earlier failed to capitalize on their good start as they were held back to a total which always looked below par.

Being sent to bat first, Sylhet openers Andre Fletcher and Rubel Mea gave the side a decent start, sharing 62-run for the opening stand with the former particularly sending the bowlers in receiving end.

Robbie Frylinck broke through with the wicket of Fletcher for 37, before the West Indian did more damage.

Frylinck was expensive but he was key in literally ruining Sylhet’s hope of making a gigantic total as he removed another dangerman, Johnson Charles, for 17.

Rubel Mea followed the suit at a moment when he was due to give back the side after spending so much time in the crease. He was the highest score for Sylhet with 39 that came off 44 balls with the help of two fours and one six.

Pacer Shahidul Islam was the bowler to deny Rubel Mea and he later got the better of Mohammad Mithun for a duck.

Sherfane Rutherford and skipper Mosaddek Hossain, however, stalled Khulna bowlers’ progress to help the side propel past 150 runs mark.

Rutherford hit two sixes in his 20 ball-26 not out while Mosaddek remained unbeaten on 23 off 18, sending the ball across the ropes for thrice.

Shahidul and Frylinck claimed two wickets apiece but the latter was expensive as he gave away 58 runs in four overs. Despite getting no wicket, Mohammad Amir was key in restricting Sylhet to a below par total as he conceded just 17 runs in four overs.