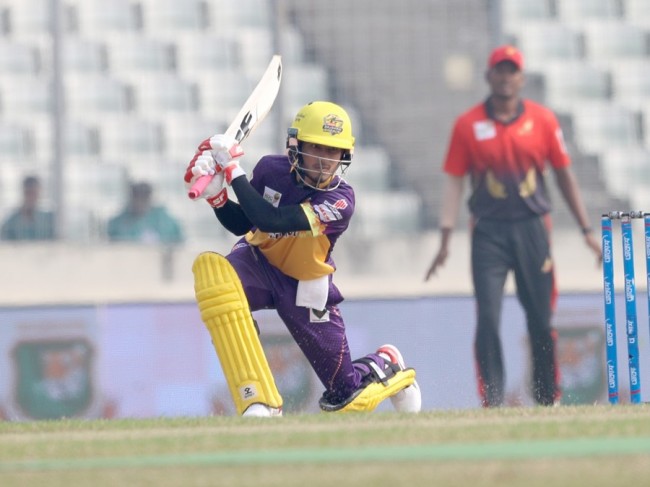 Talented young player Afif Hossain couldn’t just live up to the expectation after being promoted to the up in the batting order but the performance he was showing, it seemed a long innings is on the cards.

“There was the chance to prolong the innings, which I couldn’t do,” Afif said, referring his 43 runs knock against Cumilla Warriors.

Afif’s team Rajshahi Royals, however, won the match by 15 runs, overcoming a marauding batting of Soumya Sarkar who blasted 48 ball-88 not out.

“It was a wrong shot considering the situation. I should not play the shot. I could bat straight. But I am sure a long innings is in the offing,” he added.

A natural stroke-maker Afif is considered as one of the Bangladesh batsmen who has the possibility of hitting a century as he is currently opening the innings. And Afif also believes that he could it.

Especially after his match-winning knock against Zimbabwe in the tri-nation T20 series this year, Afif is considered as one of the future prospects of Bangladesh.

Afif said this BPL is the platform for him to hone his skill as he is surrounded by some of the world-class players in the dressing room.

“I have got some experienced players around me in my dressing room. There is like Shoaib Malik, Ravi Bopara. I am trying to learn from them. There is also Andre Russell who is a power-hitter. I tried to learn some trick of power-hitting in T20 cricket from him,” he pointed out.

“The main focus is on this tournament at the moment. There are some matches ahead and I will try to do well there. In the last BPL, I got out after scoring 20/30 runs. So my target is to prolong my innings this year and I am trying hard.”

In this season, the tournament saw two centurions, all of whom was an overseas player. Afif believes, the Bangladeshi batsman also could hit a century in the coming days.

“Soumya Sarkar had the chance to score century today but not many overs left for him as he was chasing a huge total. But I believe a Bangladeshi player would definitely score a century in this tournament,” he concluded.