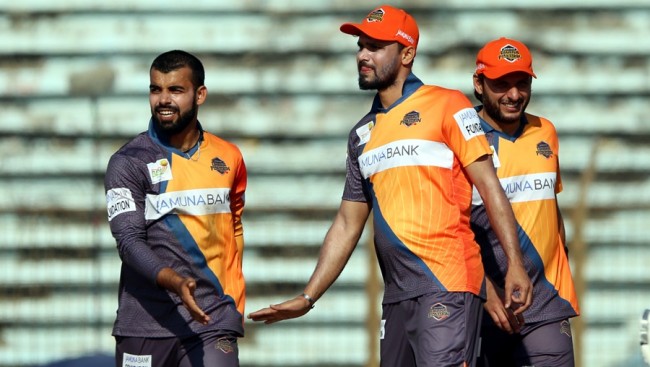 Bangladesh ODI skipper Mashrafee bin Murtaza said on Friday that hoping that he will perform in the ongoing Bangabandhu Bangladesh Premier League is quite surprising as he remains unsold during the players' draft ahead of the tournament.

Dhaka Platoons gave Mashrafe Mortaza a lifeline as they picked up the four-time BPL winner late during the players' draft for the upcoming edition of the Bangabandhu Bangladesh Premier League at a city hotel on November 17.

Mashrafee, the current ODI skipper, did not find any takers until the fourth round before Platoon decided to pick him as their second A+ category player after grabbing Tamim Iqbal earlier.

Mashrafee, who returned to competitive cricket after a five-month gap due to his political engagement, showed that he is still capable of performing in the shortest format, picking 1-14 against table-toppers Chattogram Challengers on Friday from his allotted four-over quota.

When asked whether he is fulfilling the expectations of his team with his performance in the BBPL, Mashrafee decided to speak his heart out that was filled with pain understandably as he found no buyers initially in the player’s draft.

‘’ I almost remain unsold in an auction so how anyone can have expectation from me,’’ Mashrafee told reporters at the Sher-e-Bangla National Stadium on Friday.

‘’If there was hope about me than I should have been sold earlier so I don’t know whether it[ expectations on my cricketing ability]  is right or not because the owner can tell it more clearly in this regard,’’ he said.

Mashrafee added that performance-wise he is having a mixed tournament so far adding that he can only assess his performance after completing his stint in the ongoing BBPL.

‘’I am not bothered about my own performance. I have come back to the field after a long time and trying to give my best,’’ said Mashrafee.

‘’I am playing after five months and tried to adjust quickly because I was out of cricket for some time,’’ he said.

‘’I played well in some games and performed badly in some matches as well and in T-20 it is difficult to predict about own performance,’’ he said

‘’I am trying to give my best shot in the tournament and sometimes it worked while on other occasions it did not happen as per plan. Only after completing the BBPL can I say where I stood in the tournament,’’ he concluded.