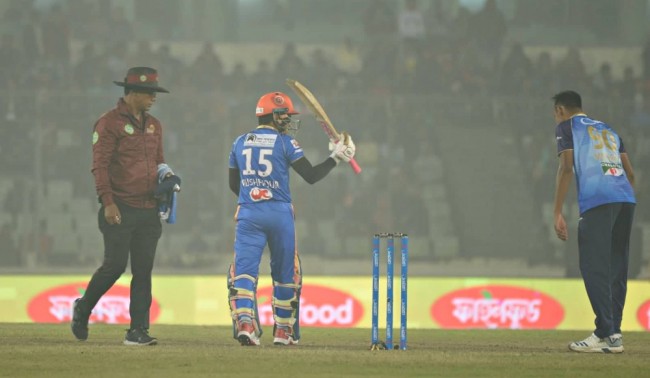 Captain Mushfiqur Rahim led the side from the front with a scintillating 48 ball-59 as Khulna Tigers amassed a respectable 182-7 against Rangpur Rangers in their sixth match of the Bangabandhu Bangladesh Premier League (BBPL) at Sher-e-Bangla National Cricket Stadium on Friday.

Shane Watson, who arrived in the country on Thursday night to join Rangpur Rangers's tent, was appointed the team’s captain, making him the third skipper in Rangpur’s sixth match.

He won the toss on his first BBPL appearance and sent Khulna batting first, which seemed to be proved as a right decision as Rangpur bowlers made early inroads to leave Khulna at precarious 23-2. That included the wicket of Rilee Rossouw for naught, who has been in excellent form.

Shamsur Rahman Shuvo then followed their suit to make the team three down for 45 while Nazmul Hossain Shanto who held the other end and at the same time paced the innings fell for 30 before the team’s run crossed 100.

Mushfiqur and Najibullah Zadran then resisted and shared 82-run for the fifth wicket stand to help the side push towards a big total.

Zadran was out on 41 off 26, hitting six fours and one six. Mushfiqur then was dismissed in the last over but not before Khulna reached a total that looked safe for the time being.

Mushfiqur smashed four fours and two sixes in his knock.

Amid Mushfiqur and Zadran’s carnage, Rangpur pace bowler Mustafizur Rahman, yet again came up with a superb bowling show as he finished with 3-28 in his four overs. Lewis Gregory took 2-36 while Mohammad Nabi though took one wicket, conceded just 16 runs in his four overs.