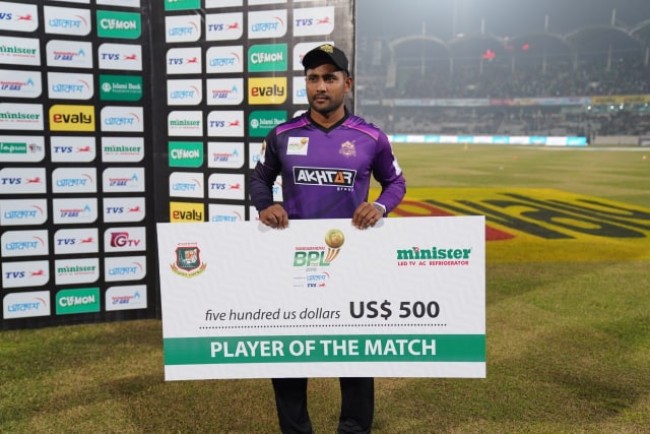 On a surface where run-making was not the easiest job, stand-in skipper Imrul Kayes played a sublime 53 ball-54 not out to help Chattogram Challengers record a six-wicket win over Dhaka Platoon in the Bangabandhu Bangladesh Premier League (BBPL) at the Sher-e-Bangla National Cricket Stadium on Friday.

Having won the game, Chattogram indeed made a giant leap towards the play-off berth in the tournament. They also retained their top spot in the BBPL point table with 12 points from eight games by virtue of this victory.

On a slow surface, Dhaka, being sent to bat first in the first match of the second phase of Dhaka part of BBPL, was held back to paltry 124-9, which Kayes made one-way traffic after a minor blip.

His knock made the eventual difference as Chattogram cantered to the victory with 125-4 in 18.4 overs.

Chattogram lost Lendl Simmons and Junaid Siddique in just fourth overs with the scoreboard reading 25-2. As it looked, things wouldn’t be easier for them, Kayes and Chadwick Walton combined for a 41-run to steady the ship with the latter hitting some big shots to keep the asking run rate under control.

Walton struck three sixes and one four in his 16 ball-25 before being dismissed by Wahab Riaz. Riaz latter gave Chattogram further headache by getting rid of Ryan Burl for 13 but Kayes appeared to play on a different surfaces.

He played shots at his will in the slow pitch to eventually help the side cruise to the victory. The stand-in captain smashed five fours and two sixes in his 53 ball-54 not out.

Dhaka’s gamble with Mahedi Hasan, playing him as top-order batsmen paid high dividends in the last two matches but this time it didn’t click. He was out for naught after the dismissal of Anamul Haque Bijoy who scored 14.

Their dismissal in the same over left Dhaka to 32-2 in sixth over. Tamim and Mominul though looked to steady the ship, the runs were not coming as expected pace. Situation worsened when Tamim was dismissed for 21, after a futile attempt to charge the left-arm spinner Nasum Ahmed.

His dismissal sparked the collapse as Dhaka started losing wicket at regular intervals. Even though Mominul held one end and No. 10 batsman Wahab Riaz played some big shots, Dhaka couldn’t amass the total which could give their bowlers something to defend.

Mominul was the top-scorer for the side with 32 while Wahab Riaz made 23. Mashrafe Bin Mortaza was unbeaten on 17.

After this defeat, Dhaka stayed at third position with eight points from seven games.