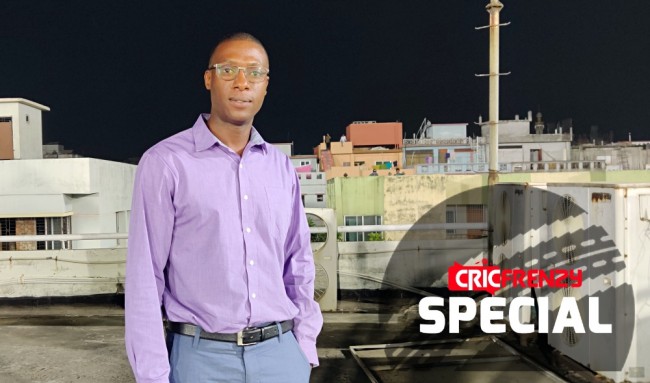 Vusimuzi Sibanda, one of the longest-serving cricketers of Zimbabwe during the tumultuous period of the country is in Bangladesh to give live commentary on Bangabandhu Bangladesh Premier League (BBPL). This is the second time that the cricketer came into this country as a commentator. Even though he doesn’t bid bye to the cricket still, the 36-year old is trying to prepare him for this commentary job.

Sibanda who came in Bangladesh earlier as a cricketer termed this country as his second home. While talking to the Cricfrenzy exclusively, Sibanda hailed Bangladesh’s hospitality along with talking on the Zimbabwe national team and the domestic structure of the Southern African nation.

Here’s the excerpt for the Cricfrenzy readers:

Cricfrenzy: In the last two years, you have been in the commentary box of BPL. Can you please share your experience?

Vusimuzi Sibanda: I have just started but obviously enjoying very much. There is lot to learn still. It’s a learning curve before bidding bye to cricket and joins the commentary box. I am enjoying.

Cricfrenzy: Any desire to come as a commentator in the coming season?

Cricfrenzy: Can you please share with us the difference between the last and current BPL?

Sibanda: I saw a lot of young cricketers in this season, comparatively much higher than the previous season, which is a very good sign. It is always good to see young cricketers getting the opportunity. The experienced players are there always. The young cricketers have been learning from the seasoned campaigners. It is good for BCB because they can bolster their pipeline in doing so.

Cricfrenzy: Your take on the Bangladesh fans?

Sibanda: I saw people here in this part enjoy cricket a lot. They are madly in love with cricket, there is no doubt. When I came here as a player, I saw the fans coming here in abundance. For any country, it’s a good sign.

Crifrenzy: What do you think about the future of BPL?

Sibanda: More preciously, the future is bright. People love to watch the shortest format of cricket. So BPL’s popularity will never dwindle. But Test cricket is always on top even though people love to see T20 cricket. I have heard people saying T20 is batsman’s game but I think bowlers also do well here. I have seen a lot of young players coming so I would say the future of BPL is bright. Moreover, the International cricketers enhanced the standard of this tournament.

Cricfrenzy: Since you came here many times as a cricketer and now a commentator, do you feel it’s your second home?

Sibanda: If I say this, I won’t be wrong. I have come here many times—as a player and now as a commentator. Yes, it feels like a second home.

Sibanda: I believe wherever you stay, the problem will be there always. People sometimes aren’t happy with many things, so you have to face the challenges. Zimbabwe board has been in a tougher problem now at this moment. They have been facing a lot of troubles. I hope they can overcome all of those adversities. Many problems have been solved already. You know we were banned from cricket for some months. The attention was diverted. As a player I will say, that incident pushed us to the back foot because players always want to play. The more you will play, the more improvement will be happened in cricket. If you play fewer crickets, you won’t get where your career stands.

Cricfrenzy: Before the 2003 World Cup, Zimbabwe was blessed with cricketers like Flowers Brothers, Heath Streak, Alastair Campbell and many more. But there is no cricketer of their standard now. Can you please tell as to why such sorts of cricketers are not coming now?

Sibanda: We have many talented cricketers in our country but we don’t get enough opportunity to play international cricket. Playing more International cricket always play a big role in building cricketers. The more you will play cricket, the more mature you will be. So since we are not playing enough cricket, we can’t improve that much. If they get the opportunity to play more cricket, the players like Flower Brothers, Streak will emerge out. But the problem is neither we can play more cricket domestically nor we get the chance to play international cricket. But the good thing is that we have many games coming up. Hopefully, a lot of players will come out. But it would be wrong if we say we haven’t enough talented cricketers.

Cricfrenzy: Is there any problem in the Zimbabwe board? Do the players get little co-operation from the board?

Sibanda: Board is always there for the players but what the main thing is how it helps the players. There are many players who are not satisfied with how the board helps them. Wherever you are, there will be challenges always-be it in the aspect of communication or support. Not everyone will think the same. Eventually, the journey is not easy for anyone. I believe the board tries its best to support the players.

Cricfrenzy: What was your feelings when ICC banned Zimbabwe cricket despite playing for many years? How was the reaction of the people of your country?

Sibanda: That was heartbreaking. After playing so many years and you got banned, you definitely will feel jaded, broken inside you. Many people didn’t get it what happened. The fans got disappointed. We can’t just think that we can never play cricket. I can’t understand how things panned out. But in the end the suspension was lifted. Things got normal. First-class cricket has just started again. Hopefully, everything will be going right. I am always hopeful about our good future.

Cricfrenzy: Do you think Bangladesh cricket would taste low ebb like Zimbabwe in the future since nothing is going right in this country’s cricket. Shakib has been banned and Bangladesh lost to Afghanistan in Test and T20 cricket. What do you think in this regard?

Sibanda: I think Afghanistan cricket should be credited. They have extremely worked hard with their cricket and they came here and beat Bangladesh in Test. They played good cricket. But it is wrong that Bangladesh cricket is going downhill spiral or may go. This is cricket—in cricket someday you will win and someday you will loss. This BPL is proof that cricket in your country is going upward spiral. And there is little possibility that they will go backward. If everything is going right, Bangladesh will go up and up. Afghanistan also because they are fast improving side and increase the competition. This is healthy for world cricket.

Cricfrenzy: Bangladesh got its first Test victory against Zimbabwe in 2005. You were a member of that team and played one Test. What was the condition of the team after that defeat? Did that victory play a role in helping Bangladesh cricket to come forward?

Sibanda: Bangladesh was old of just four or five years in Test cricket during that period. Victory in a quick time would mentally motivate any side, no doubt. If you do well, you will get fuel to go ahead, be it personally or team-wise. I would say that victory gives Bangladesh confidence. I still remember after that defeat our dressing room was silent, there was pin-drop silence. We weren’t feeling well. But it’s true we couldn’t play well in that series. We had given our best but nothing was going our way. We lost badly and this is cricket. Every day won’t be your day. But the important thing is to turn the things around and fight.

Cricfrenzy: Who do you think as the future prospects of Bangladesh cricket? Do you see anyone?

Sibanda: This is a tougher question for me because there are many talented cricketers here. There are also many who are not playing BPL because of the immense competition in getting the teams. It is tough to single out all of the players’ names. But the likes of Naeem, Afif, Biplob, Ebadot are doing well. If they get proper care, they can begem. There are also so many players, whose name I can’t single out.

Cricfrenzy: Any advice for the Bangladeshi young cricketers?

Sibanda: Cricket is always challenging. You have come here and can’t play well it doesn’t mean you don’t know how to play cricket. You have to go back to your basics when things don’t work for you. A match can turn your fate. But the important thing is to fight and hold the mentality of fighting. You can get it tough but you have to go ahead. And then you will improve and do well.

Cricfrenzy: You played your last Test for Zimbabwe here in Mirpur in 2016. Did you ever think that it was going to be your last match?

Sibanda: No, seriously I didn’t have any idea. I have played my last match in Mirpur and now I am talking, standing here in Mirpur. It’s not so long. When you will be in cricket, you will never have any idea that you have already played your last match. This totally depends on the selectors whether they are keeping me in their future plan. In my case that was the last. I have compromised with it. Maybe what happened, happened for our good. I am now talking about Zimbabwe cricket. For the time being, I am thinking about my future.

Cricfrenzy: What’s your plan about your retirement?

Sibanda: It is sure, I am leaving cricket very quickly. I am yet to give any formal declaration but the time will say.

Cricfrenzy: You and Masakadza started cricket almost in the same period. He has recently retired from cricket and joined Zimbabwe Cricket Board. How was the experience to play with him?

Sibanda: I have made the cut in the national team after Hamilton [Masakadza]. God almighty gave me the opportunity to play for Zimbabwe and that’s why I am grateful to him. He has given me the talent to play cricket. I have represented Zimbabwe cricket for 15 years. I have wanted it always and I got it. But in some matches I could have played well, however, I, unfortunately, got out for my own mistakes. Those things still haunt me. There were scopes for improvement. But in the end, I am happy to represent my country for such good years.

Cricfrenzy: Can you please tell the standard of Zimbabwe domestic cricket? What’s the role of selectors for first-class cricket and how is the competition there?

Sibanda: The standard of our domestic cricket is good. Many players have been coming from the first-class structure. But I think due to not getting enough matches to play, we can’t do well. I don’t know on what basis the selectors form the team. Maybe they do their work well. But I have no idea as to how they do it. What I know is that Zimbabwe cricket is trying to rebuild after such an incident [banned by ICC]. Everyone needs to find out the solution. Since I am not there, I don’t want to make comment on that.

Cricfrenzy: Is there any advice from you for Zimbabwe cricket?