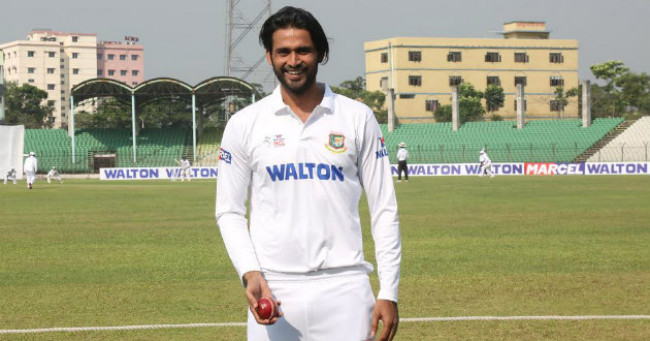 BCB is yet to take any decision in this regard but according to insiders, he is unlikely to get the NOC as he is banned for breaching code of conduct in the just concluded National Cricket League that earned him a five-year ban.

Out of favor national pacer Shahadat Hossain was yesterday slapped with a five-year ban, with two years of that suspended, for assaulting his Dhaka Division teammate Arafat Sunny Jnr during a National Cricket League (NCL) match in Khulna on Sunday.

The Bangladesh Cricket Board (BCB) confirmed the sentence, which also included a fine of Tk 3 lakh.

The cricketer has the opportunity to appeal the verdict till November 26.

The 33-year-old, who played 38 Tests, 51 ODIs and 6 T20Is for the national side, lost his cool and slapped Arafat after he had refused to shine the ball during their side’s encounter with Khulna Division on the second day of the sixth round of the NCL at the Sheikh Abu Naser Stadium in Khulna.

‘’I have a received letter from the board. Today I have given the letter to board so that they allow me to play abroad. Because I have got opportunity to play outside the country,’’ Shahadat told Cricfrenzy on Friday.

‘’I have got a chance to play but I am not sure whether I will get the chance to play. I am suspended for five years while I won’t be able to play for two years,’’ he said.

‘’What will I do during this time of suspension,’’ questioned Shahadat.

‘’So I am trying hard to get the NOC so that I can play,’’ he said adding that he was disappointed with the verdict.

“I have made a mistake and I realise that. Sunny and I later resolved the matter. I never imagined that I will get such harsh punishment and I am very disappointed,’’ he said.

Shahadat had a full hearing but it went in vain as BCB was reluctant to minimize his punishment.