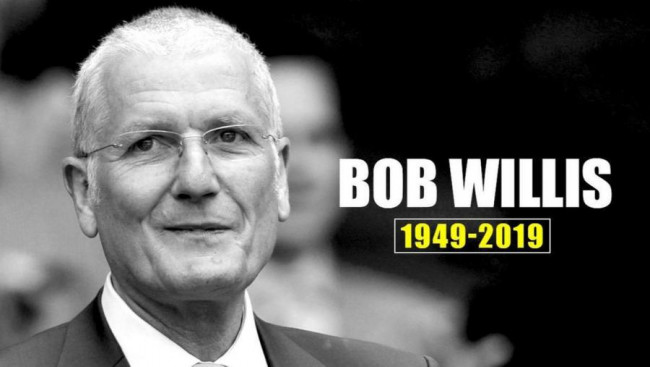 Bob Willis, who famously bowled England to a dramatic Test win against Australia in 1981, has died aged 70, his family announced on Wednesday.

Willis played in 90 Tests, taking 325 wickets with his aggressive pace bowling and also captained England for a spell before retiring in 1984 and taking up a career in broadcasting.

His most famous moment as a player came in the 1981 Ashes series, known as "Botham's Ashes" for Ian Botham's devastating displays with bat and ball, when he took 8-43 in a remarkable spell of fast bowling in the third Test at Headingley that changed the course of the series.

It is understood that Willis, who was diagnosed with prostate cancer three years ago, had begun to deteriorate in health over the past two months, with a recent scan revealing the cancer had advanced.

"We are heartbroken to lose our beloved Bob, who was an incredible husband, father, brother and grandfather," said a statement from the Willis family.

"He made a huge impact on everybody he knew and we will miss him terribly."

The England and Wales Cricket Board said it was deeply saddened by Willis's death, adding: "Cricket has lost a dear friend".

"He will always be remembered for his outstanding cricket career.... In later years as a broadcaster Bob was a perceptive and respected voice at the microphone," the ECB said in a statement.

Star all-rounder Botham previously described his teammate as a "tremendous trier, a great team man and an inspiration -- the only world-class fast bowler in my time as an England player".

Willis, who is fourth on the all-time list of England Test wicket-takers behind James Anderson, Stuart Broad and Botham, started his first-class career with Surrey before moving to Warwickshire, where he spent the bulk of his career.

Surrey said they were "devastated" to learn of the bowler's death while Warwickshire tweeted their condolences.

Former England captain David Gower, who played with Willis and was a colleague of his at Sky Sports, described him as "a very loyal friend and a loyal supporter".

"I toured with him as a captain and I took over the captaincy from him and then had him as what was called in those days as an assistant manager," he told BBC Radio. "He was a very loyal friend and a loyal supporter.

"Without going into too much unseemly detail, it was an era where you were allowed to have more fun than you are possibly today. Various tours Down Under were colourful, let's put it that way."

"As a batsman, you always knew you were in a contest when you were facing Bob; he just kept coming at you."

Willis made his international debut aged 21 in the 1971 Ashes in Australia.

With his great mop of brown curls, he struck fear into batsmen, demonstrating great resilience to come back from surgery on both knees in 1975.

The bowler, who stood at 1.98 metres (six feet, six inches), was a rare genuine paceman for England at a time when Australian and West Indies quicks dominated the Test arena.

He skippered England in 18 Tests and 29 one-day internationals before his retirement from all cricket in 1984, having taken 899 first-class wickets.

Last year the ECB named him in its greatest-ever Test side, hailing him as "an indefatigable and aggressive fast bowler".

His Headingley heroics will be forever etched into the memories of English cricket fans.

England, trailing 1-0 in the six-match series, were staring at a humiliating defeat after being forced to follow on, before Botham's spectacular 149 not out gave them a glimmer of hope.

Australia, chasing just 130 to win, looked on course for victory at 56-1 but Willis then went on the rampage, taking eight wickets as the tourists collapsed to 111 all out.

England went on to win the series 3-1 and Willis finished with 29 wickets at 22.96 in six matches.