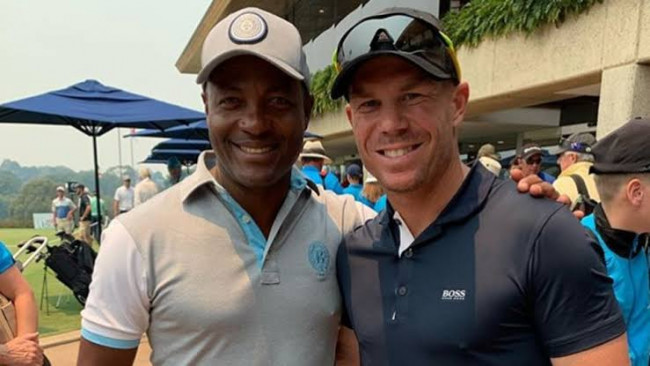 David Warner, who scored a record-breaking unbeaten 335 against Pakistan recently, met up with West Indies legend Brian Lara on Wednesday and hopes he will one day break the veteran’s record of having scored the most number of runs in a single innings of a Test match.

The Australian opener posted a photo with Lara, with the caption saying, “Great to catch up with the legend himself. Maybe one day I will get another chance to Knock 400 off. @brianlaraofficial”.

Warner scored 335 against Pakistan in the second Test at Adelaide Oval on Saturday, from just 418 balls, hitting an impressive 39 boundaries and a maximum. Although he did break Donald Bradman’s record, he couldn’t get a crack at breaking Matthew Hayden’s 381 or Brian Lara’s 400*, as captain Tim Paine decided to declare the innings for 589/3.

The entire cricketing fraternity wondered if the southpaw could breach the record 400-run figure, but it was not meant to be. Even the record-holding West Indies legend himself was getting ready to meet Warner on Saturday.

“It would have been amazing to walk out there [as Sobers did]. Records are made to be broken. It’s great when they are broken by attacking players. Entertainers. Being in Adelaide I would have got an opportunity to if not walk out at least meet him at this opportune time,” Lara was quoted as saying by News Corp.

The 50-year-old former West Indies captain has broken the record of highest individual Test score twice — first when he overtook compatriot Gary Sobers’ 36-year-old record of 365 by scoring 375 against England in 1994, and then again when he bettered his own record to reach 400 against England again in 2004.

“I still think Warner may have time to do it in his career. I know he is not a spring chicken but as soon as you get that 300 you know how to get 400. He may get another shot at it.”

Warner went past Don Bradman and Mark Taylor’s top scores of 334 to sit second behind Hayden as the second highest-ever score by an Australian.

“After passing Sir Donald Bradman I would have loved to see him race towards me. I was getting dressed to come back near the end of his innings. I was listening to commentators say whether he would have a go at Matthew Hayden’s 380, but I felt if he got to 381 he would have to have a go at my record,” said Lara.

Warner, on the other hand, believes that India opener Rohit Sharma, who holds the record of the highest individual score in ODIs, can eventually break Lara’s record in Test cricket

“I think, one day, if I’ve to name a player, I reckon it could be Rohit Sharma. Definitely,” said Warner to Fox Sports.

Pooran steps down as WI captain