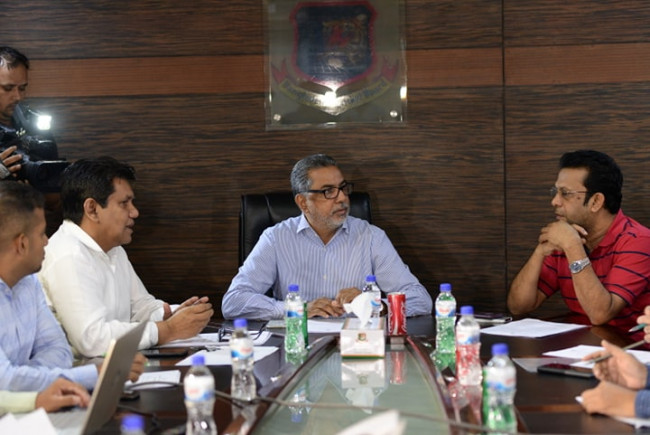 Bangladesh Cricket Board mulls mandatory local leg spinners in each team participating in the upcoming Bangabandhu Bangladesh Premier League.
BCB had officially began their journey to host the BPL by sitting with probable sponsors for the tournament that they want to host all by themselves as they have cut off all ties with franchises earlier.

‘’We have spoken with four sponsor’s partners today and we have given them the outline of their roles and in the next meeting the committee will advise BCB and we will make a decision from there,’’ Mahbub told reporters after completing the meeting with the four sponsors.

‘’We have some questions too about their background. Those of them were not clear about their roles in the BPL and we have cleared them today we have given an EOI of team sponsorship, not team owner,’’ he said.

‘’They will not be team owners but only team sponsor and what benefit they will get by sponsorship we have given them a clear idea about that .like they will enjoy the same benefits as national team sponsor do. They will not have direct involvement about team selection but they can give suggestion which player they want in their team,’’ he said before revealing the unique idea of forcing each team to field at least one leg spinner in the team.

‘’We had made some rules and regulations for each team participating in the tournament. The theme of Bangabandhu BPL is clear that we want to bring out players from this tournament. The significance of the tournament will be lesser if Bangladeshi players cannot bowl or bat in the right position,’’ he said.

‘’We are looking for leg spinners. When a franchise came into a tournament they are more interested in winning and as a result in some areas we are lacking in the national team. So we have taken suggestion from the national team and they insisted they need leg spinners and so we have decided that every team will have to play a leg spinner and he have to complete his four-over quota and that will also ensure that he is playing in the best XI,’’ he said.

Mahbub added that the BPL can be delayed as they are yet to complete the formalities with all the sponsors while they are also thinking about the upcoming tour of Pakistan.

As per the future tour plan (FTP) of the International Cricket Council (ICC), Bangladesh have a tour to Pakistan to play a two-match Test series and a three-match T20I series in January-February 2020. But the series will go ahead only if the security assessment of BCB is done in a positive manner.

‘’We have the option of delaying the BPL for 7 to 10 days and we have an international series against Pakistan during that time,’’ and bpl will be played with adjustment of the series,’’ said Mahbub.

‘’We will play BPL with enough time in our hand. I still do think we have enough time for the BPL. We have two more meeting left with the sponsor,’’ he said.

‘’In the next BPL governing council meeting we will select the date for the draft.

‘’Before the draft we have included 400 international players have registered for the draft .if any additional foreign players need outside the draft than these team sponsors  can have them in their team but they will have to bear all the cost will be bear by them,’’ he concluded.