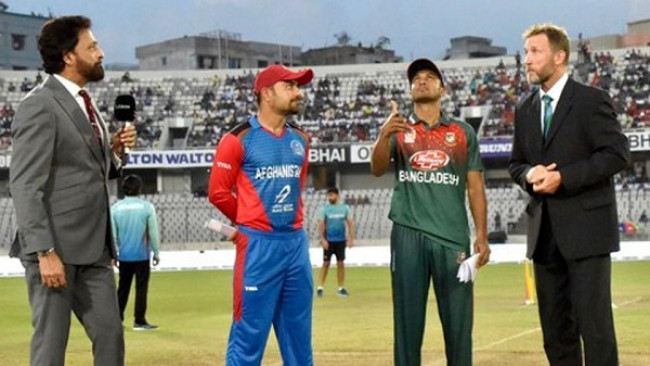 With an aim to gain the confidence for the Tri-nation T20 series final,  Bangladesh would bowl first against Afghanistan in the last match of the group phase after coin favoured the captain Shakib Al Hasan at the Zahur Ahmed Chowdhury Stadium in Chattogram on Saturday.

The match turned out to be the dress rehearsal of final after Zimbabwe, the third team of the tournament, was eliminated from the race.

Bangladesh however had a forced change in the squad due to the hand injury of leg-spinner Aminul Islam Biplob. Sabbir Rahman came in the place of the 19-year old leggie who claimed 2-18 on his debut match against Zimbabwe and gave the nations a hope of being the solution of Bangladesh’s wrist-spinner problem.
Bangladesh won their both of the matches against Zimbabwe but lost the match against Afghanistan.

They came to the match with four-game losing streak against Afghans in the T20 format. Hence the match is not only for them to gain the confidence ahead of the final but also to end the win-draught against Afghans.

Afghanistan lost their last match to Zimbabwe and therefore they want to get back to the winning way once again before the final.
They had however two changes from the last match with Fazal Niazai and Dawlat Zadran being excluded. Navin-ul-Haq made a debut while Karim Janat was brought back.