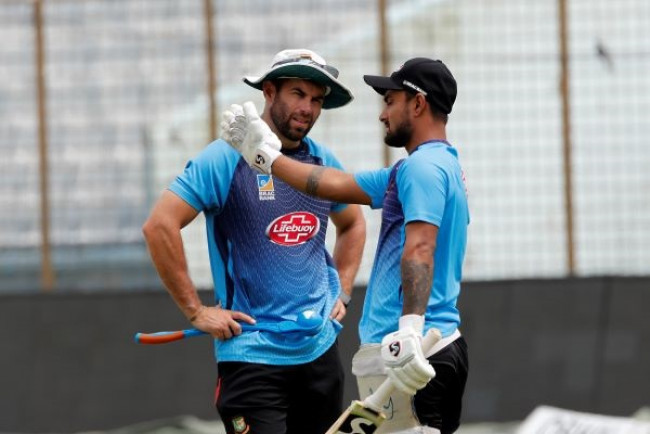 Bangladesh batting consultant Neil McKenzie on Friday had an extensive session with openers ahead of the Afghanistan match, scheduled at the Zahur Ahmed Chowdhury Stadium on September21.

Bangladesh batting unit need to blaze from all cylinders if they want to earn a win against Afghanistan and it seemed McKenzie understood the importance and tried to make sure that it begins at the top.McKenzie was seen spending some time with Liton Kumar Das in the other net when some of the other batsmen were batting under the guidance of head coach Russell Domingo.

His body language was also been questioned as he seemed to have a laid back attitude while playing over the cover and according to McKenzie it would be better if he keeps his back straight as that is likely to give him more power.
McKenzie also worked with Nazmul Hossain and Nayeem Sheikh, both of whom are quite new as far as he is concerned as former made a comeback after a gap while the latter is still uncapped at the international level.
It was seen the Nayeem’s head falls down while playing certain shots and as a result the power he generates from those shots are usually lesser as this falling of head also plays a part behind disturbing his balance in the wicket.
Nayeem looked hesitant to disclose the lessons imparted by McKenzie apart from saying that he just asked him to play his natural game and asked him to be ready.
‘’McKenzie just told me to play my natural game and asked me to be ready mentally,’’ Nayeem Cricfrenzy.com after the practice session.
McKenzie added that they are talented young bunch of cricketers and he is looking forward to work with them.