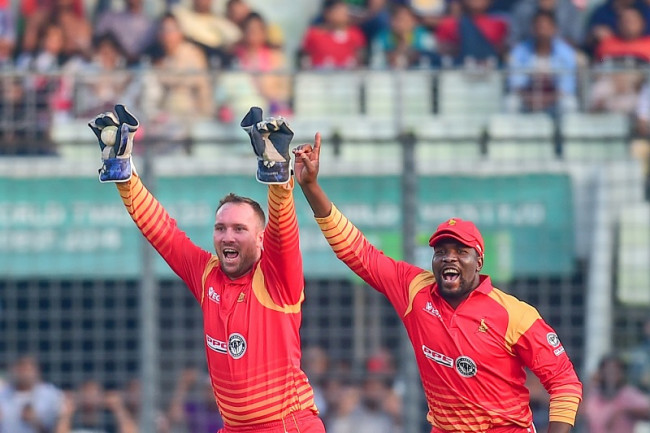 Hamilton Masakadza didn’t wait for anybody else to make his farewell match remarkable. Indeed he himself scripted his fitting farewell from the International cricket, clattering a 42 ball-71 that sealed Zimbabwe’s  seven-wicket victory over Afghanistan in their last match in the Tri-nation T20 series on Friday at the Zahur Ahmed Chowdhury Stadium in Chattogram.

By virtue of this victory, Zimbabwe got the maiden T20 victory over Afghans, ending their eight-match winning streak and also restored some pride, bowing out the tournament with a victory in four matches. In a match that was just an academic interest following Zimbabwe’s elimination from the final race, Afghan opener Rahmanullah Gurbaz smashed a 47 ball-61 to help the side amass 155-8 and it looked a winning score in a pitch that was getting slower.

But Masakadza was determined to make his last match remarkable one. For one last time he came up all guns blazing to help the side overhaul the target with 156-3 in 19.3 overs.Masakadza stitched two important partnership two take the side on the verge of victory—40 with Brendan Taylor for the opening stand and a match-winning 70-run partnership with Regis Chakabva for the second wicket before Dawlat Zadran got him, caught by Mohammad Nabi at long-on.

By then he struck four fours and five massive sixes.  Taylor scored 19.Chakabva kept the runs flowing hitting 39 off 32 before being dismissed by Mujeeb Ur Rahman. Sean Williams remained unbeaten on 21 before pulling away one towards the fine leg for a single to seal the deal.

But Zimbabwe came back strongly in the match half-way through innings with a flurry of wickets when it appeared that Afghans would end up scoring closer to 200.Gurbaz and Hazratullah Zazai combined for an 83-run partnership in just 9.3 overs to indicate a big score.

Zazai scored 31 off 24 before Tinotenda Mutumbodzi had him caught by Richmond Mutumbami to give the side a much-needed breakthrough.Mutumbodzi then bowled in disciplined way to stifle the Afghans power-packed batting line up.
But Gurbaz continued his onslaught. It needed an excellent bowling from Sean Williams to rattle his stump and subsequently curbed the aggression of the Afghans batsman.Christopher Mpofu then sliced out the Afghans middle order in a show of excellent bowling and finally ended with his career best 4-30.

Afghanistan batsmen however didn’t help their cause by playing a forced shot when the pitch was getting slower considerably.

Shafiqullah Shafiq was the other notable scorer with 16 while debutant Fazal Niazai scored 12.

Afghanistan will take on Bangladesh tomorrow in the dress rehearsal of final which is on September 24 at the Sher-e-Bangla National Cricket Stadium in Dhaka.