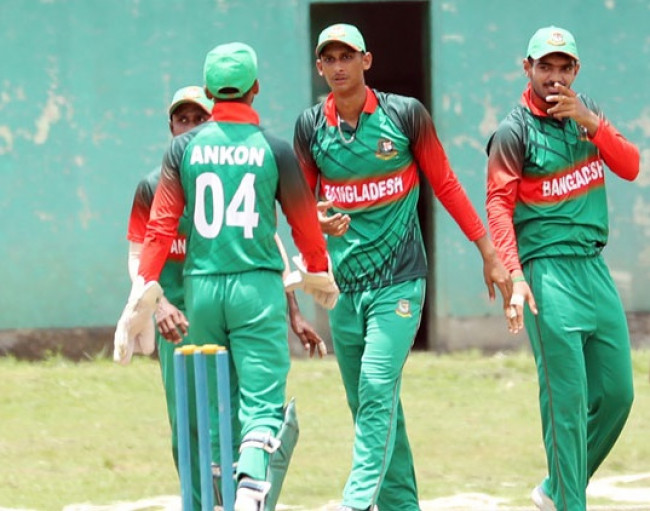 Bangladesh Under-19 began the five-match one-day series against India-23 with disappointing note as they suffered a 34-run defeat to the hosts at Ekana Cricket Stadium in Lucknow on Friday.

The match, which was originally scheduled to be held on Thursday, went on to reserve day due to rain.Batting first, India put on 192-9 in 50 overs with Aryan Juyal making the highest 69 off 86, hitting two fours and one six. Wicket-keeper BR Sharath made 42.

Sheikh Mehedi Hasan was the most successful bowler for Bangladesh with 3-29 while pace bowler Abu Hyder Rony and Saif Hasan grabbed two wickets apiece.
With such mediocre score on the board, India bowlers strangled Bangladeshi batsman for runs from the very beginning and finally restricted them to 158-9 in 48.5 overs. Zakir Hasan who was injured and forced to retire hurt on 48 was not able to bat finally.

However Zakir remained the Bangladesh’s highest scorer and the other batsmen couldn’t come up with any goods to overhaul this low total. Ariful Haque with 38 was the other notable scorer.
Shubhang Hegde, Hrithik Shokeen and Yashasvi Jaiswal snapped up two wickets apiece for India Under-23.
The second match between the two sides is on Saturday.