Bangladesh out to redeem aura as Tri-nation T20 begins 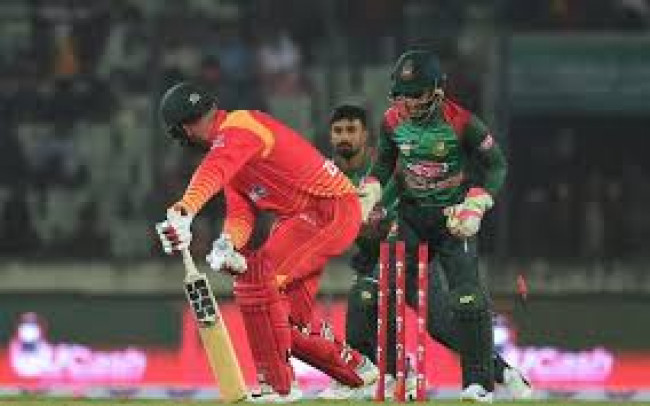 Bangladesh will be looking to break the perpetual defeat jinx that left the country cricket fraternity in a shocking state as they gear up for the Tri-nation T20 series that begins on Friday.

The Tigers will get Afghanistan and Zimbabwe as their opponents in a bid to show their true credential when the pride is at stake. And only winning a trophy could rub off the pain of the other recent defeats.

The hosts however will start the mission, taking on Zimbabwe tomorrow (Friday) at the Sher-e-Bangla National Cricket Stadium (SBNCS). The match starts at 6.30 PM.

In the double-league basis tournament, each team will face off each other twice in the tournament, hosted by two venues—SBNCS, Dhaka and Zahur Ahmed Chowdhury Stadium (ZACS) in Chattogram.

But the task is tougher for them, specially when they are yet to learn the arts of T20 cricket.

Moreover they are coming off with a humiliating Test defeat at the hands of Afghanistan, who over the times proves them stronger team than Bangladesh in shortest format of the cricket.

If Afghanistan’s 224-run victory in one-off Test against Bangladesh is believed to be unexpected, they would come up as favourites in Tri-nation T20 series, largely because of their success in this format.

Afghanistan whitewashed Bangladesh in three-match T20 series, last time when the two sides faced off each other in Dehradun in 2018.

The Afghans played 4 T20 matches against Bangladesh and won 3 while they have taken on Zimbabwe 7 times in this format and won all of the matches. The stat itself suggested how strong they are in this format and outright favourite they would be to clinch the title, shattering Bangladesh’s hopes.

Bangladesh T20 success even against Zimbabwe is not noteworthy. The Tigers played 9 T20 against the Southern African nation and won 5 while lost 4. They have played a bilateral series in this format last time in 2016 in Bangladesh and the two-match series was drawn.

Both Bangladesh and Zimbabwe knew stat but the hosts for the time being want to focus on Zimbabwe whom they meet tomorrow to kick-start the tournament.

Their main target is to get them back into the winning way first, largely because that they are going through a perpetual defeat phase. They have lost their last three Test matches in a stretch, lost last five ODIs in a row and even being beaten in their last T20 series also. So one would end up seeing Bangladesh’s defeat chart when they search Bangladesh’s result in last match in any format of cricket.

So a victory is mandatory for Bangladesh to bring back the confidence that was hugely shattered after the humiliation at the hands of Afghanistan in a one-off Test, which they were expected to win at ease.

Cricket fraternity was shocked and termed it as wake-up call but the Bangladesh Cricket Board (BCB) termed it as one-off incident, saying that if the cricketers could play to their true potential they would make amend by winning the Tri-nation T20 trophy.

Even though the discussion was revolving around whether Shakib Al Hasan really is reluctant to play Test cricket or whether he doesn’t want to lead the side, following the defeat at the hands of Afghanistan, Bangladesh team wants to turn the things around with the back at the wall.

Shakib Al Hasan will lead the side in T20 format too and expected to bring the things under control.

“We need to win the first T20 match. If we can do that then we will have the chance to bring everything under control,” Shakib said.

“The players who are selected for Test, most of them will play in T20s. Everyone has to change the mentality to T20s from Test. And at the same time we have to perform. It will be difficult for us. But the result is very important to have a good start in the tournament.”