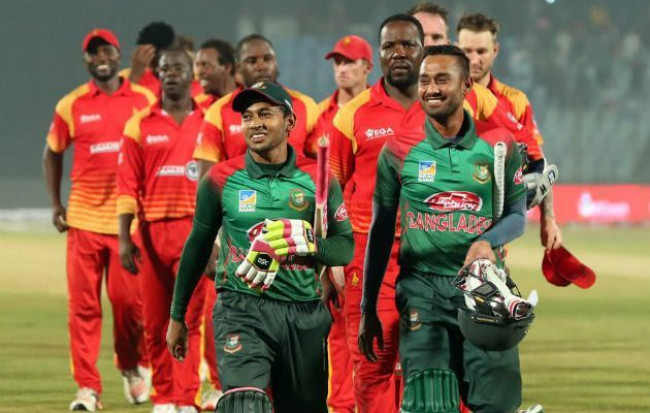 It’s a matter of research now when a team, be it national, or academy or aged level team from Bangladesh cricket win a match.Bangladesh Under-19 team though keeps winning in ACC Asia Cup but that looks a one-off incident now.

Following Bangladesh national team’s humiliating 224-run defeat to Afghanistan in the one-off Test in Chattogram,  The BCB XI, comprised with some national players, tasted a seven-wicket defeat to Zimbabwe in the warm-up T20 match at Khan Shaheb Osman Ali Stadium in Fatullah on Wednesday.

The defeat came as further shocker to them after a humiliating 224-run defeat to Afghanistan in the one-off Test match in Chattogram.

Electing to bat first, the BCB XI put up a mediocre 142-7, a score that Zimbabwe comfortably chased down, reaching the winning mark with 144-3 in 17.2 overs.

Sabbir Rahman was the highest scorer for BCB XI with 30. Mushfiqur Rahim, who was not originally named in the BCB XI for the warm-up match against Zimbabwe, featured in the match to gear up for the upcoming T20 tri-nation series.

Sabbir Rahman and Mushfiqur starred in a 53-run partnership for the third wicket before both fell in the 15th over in the space of three deliveries. BCB XI looked to increase the scoring rate but no one got going indeed.

Mohammad Naim scored 23 while Saif Hasan, who was the captain of the side made 21.

In reply, Brendan Taylor hit an unbeaten 44-ball 57 laced with two fours and three sixes while Timcyen Maruma struck a blistering unbeaten 28-ball 44 to take Zimbabwe to a seven-wicket win.

Afif Hossain was the only BCB XI bowler with any success to show for, grabbing all three Zimbabwe wickets that fell.

The tri-nation T20 series starts on Friday with the match between Bangladesh and Zimbabwe. Afghanistan is the other side of the tournament.