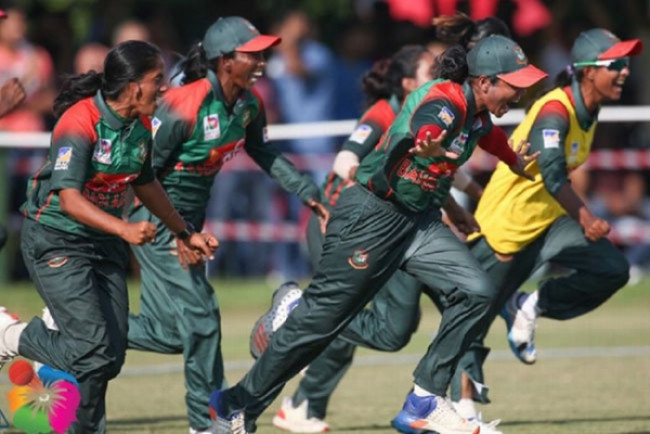 Bangladesh Women’s Cricket team have qualified for the ICC Women's T20 World Cup 2020 in Australia as they reached the final of the ICC Women’s T20 World Cup Qualifiers beating Ireland by four wickets with nine balls remaining in the first semifinal at Forthill in Dundee on Thursday.

The two finalists of the eight-team league-cum-knockout basis tournament will earn the right to play in the final round of the ICC Women’s T20 World Cup 2020 in Australia, reports UNB.

The Tigresses will play the final of the T20 World Cup Qualifiers on Saturday (Aug 7) at the same venue against the winners of the second semifinal between Group B champion Thailand and runners-up of Group A Papua New Guinea scheduled for Thursday (Aug 5) evening.
Earlier, Bangladesh played the final round of the ICC Women's T20 World Cup thrice -- in 2014 in Bangladesh, 2016 in India and in 2018 in the West Indies.

The Irish women’s batted first after winning the toss and were bundled out for 85 runs in 20 overs with only three batters -- captain Laura Delany (25), all-rounder Eimear Richardson (25) and Orla Prendergas (10) -- reaching the double figures.

In reply, Bangladesh team reached their target scoring the match-winner 86 runs for the loss of six wickets in 18.3 overs featuring 38 runs in the 5th wicket stand by Sanjida Islam and Ritu Moni.