We need to make fielding our priority- Ryan Cook 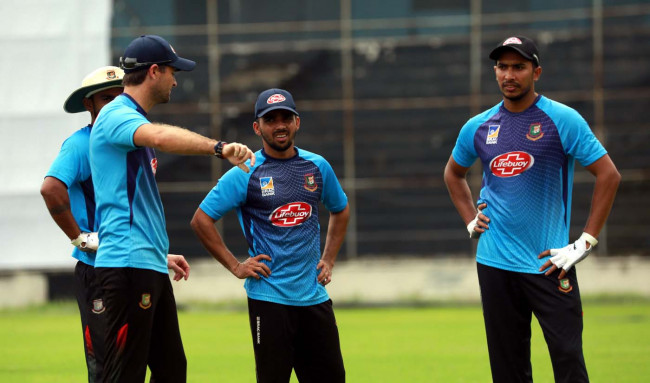 Bangladesh pictured a below average fielding display in the World Cup 2019 and they showed no sign of improvement during the post-World Cup tour in Sri Lanka and came back with whitewashed tagline in three one-day match series.

The Tiger team leaked quite a few runs due to sloppiness in the field which cost them the games both in the global tournament and some more matches pre and post the World Cup.

Ahead of some home matches against Afghanistan and Zimbabwe, Bangladesh team has started their skill training sessions from Saturday with fielding coach Ryan Cook taking up the proceeding after the conditioning camp.

The South African spoke in details with the media regarding the fielding performance and areas to improve.

Here are the experts

How do you think Bangladesh can improve as a fielding unit?

I think we try to improve every day. I mean it depends on pace that coming from. There are some errors in the basics, we are trying to fix that as much as possible. We had lots of good game in the World Cup and couple of matches slipped. Couples of chances that gone down. And the guys know that, so we are trying to improve those aspects.

Everyone can improve from where they are now. If that’s the basics at the under-15 level all the way through, that’s where you got to be. But sometimes some guys from different place, like Ebadat, who did not come from aged group cricket. So sometimes it’s difficult to know, where he is coming from. But it’s going to be a priority from the lower ages as well.

Can you explain about the catching issue?

I think it’s been inconsistent. We had some really good catches in the World Cup and during the Sri Lanka series. But catching has to be consistent. And that’s where we will be focusing on next couple of days.

How tough for national coach to work at this level?

It’s not easy but all the coaches are doing that. Everyone (coaches) needs to work on the (players’) basics. Because that’s the fundamental to win games. So from that perspective it’s not easy but that’s what we need to do.

From the slip fielding perspective, we want to transform him in the squad then we decide who need s to go. The guys who suits best to the position, will go to that position.

Do you think Bangladesh fielding is up to the standard at the moment?

I would say, probable at mid-table in the fielding. We had good chance to see ourselves at a neutral condition during the World Cup. And we found, probably we are at the middle of the pack. I would like to us in top three, we can definitely make it start to become the top three fielders in the world.

Where we need to focus to become the top three?

We need to everything. We worked really hard before the World Cup to try to convert our chances. Cause that was important. Direct hit runs out went up a lot in the World Cup, and we focused on it a lot. Catching percentage was really good, comparing with the other teams. We put lot of focus on that in order to achieve that.

I have provided the World Cup fielding report as well as the series I was involved so far. You know lots of these stuff would be really holistic.  I break it down in terms of what our percentages in each game in Test. Or how many runs we save or cost if its one-day cricket so those things I included.

One of the thing we focused a lot was, on the positions of the players in the areas of strength, we focused on it during the World Cup a lot. We actually did that quite well in Sri Lanka. So those were the things in those reports.

I think it needs to be a priority. Fielding needs to be a priority from the bottom to the top. You want players to grow up thinking ‘I want to be the best fielder in the world, never mind in Bangladesh.  And through the age group level, you need to able to put the system in place that will be able to do that. You know the fast bowlers can no longer hard on the boundary. They need to be taught a lot about how they field. So these are the big areas we can work.

Of course. Fitness is very related to fielding. We already talked about it before. But the throwing arms of some the teams, are all higher. Having involved with cricket in Australia, they take throwing very very seriously. They teach the technique even under-9 through their system. So that why you can have 11 players to park to throw the ball quick and hard from any position. We are not up to that level. So need to make sure we get up to that level and teach the basics.

We do misjudgment in fielding:

Basics take a long time to get right. It doen’t come over night. So need to work on those basics for a long period of time to get them right. And some players have shown good stride in terms of improving some of the aspects of the game. So I’m just trying to improve every guards to improve from one level to next level.

In different aspects of the game we need to see it. In T20, we would probably have 6.5 out of ten at the moment. In one-day 7.5 and in Test cricket 7 out of ten. There is obviously a lot of room to improve but there are a lot of areas we are doing well too.

Catching is problem in Test matches:

We are going to focus on that really hard as the Test championship is forthcoming.  And specially when we play away from home. The guys are really good when they come around the bat. We put fielders in short catches. I mean that is probably in culture, how often guys do that in young age. In South Africa it is uncommon to see four or five guys in the slip in an under-12 match. So you got a lot more experience to do that. Sometimes you would not find that in the low slow pitches in Bangladesh where there would be lots of slips carried for a long period of time. We have been doing that for last couple of months before the one-day games. And we will just continue to work on that and once we get identified players who need s to stand there, I think it becomes a lot easier. Slip fielding is not about one slip fielder, its about having an a accordant of the players who can take catches from that position. And the best catching team in the slips around the world, traditionally have been known to have a bunch of good fielders in the slip for a long period of time. They need to have a lot trust on who takes which catches and if we can develop that I think we can make a big difference.