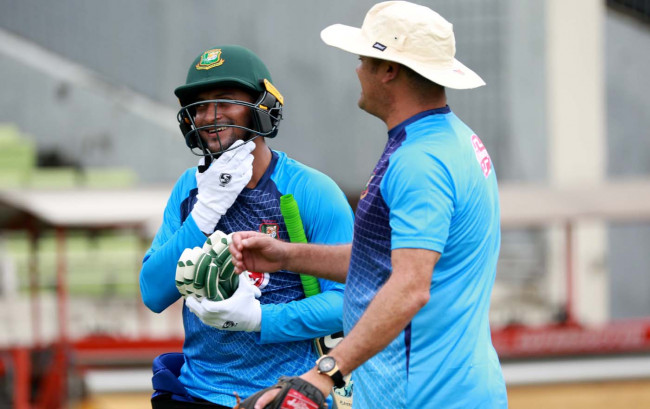 Shakib, who had a remarkable World Cup, earlier skipped the three-match ODI series against Sri Lanka, returned back to Dhaka from USA hours before joining the national nets, where skill training take the center-stage after conditioning camp in the opening week.

Shakib was in exceptional form in the World Cup as he ended with 606 runs at an average of 86.57 and also picked up 11 wickets. He struck two centuries and five half-centuries but admitted he was exhausted in the last two games Bangladesh played against India and Pakistan.

But after the tournament, he stated that he was mentally and physically fatigued and wanted to skip the tour of Sri Lanka and in the meantime complete his Hajj.

The arrival of Shakib can surely be some sort of relief for the newly appointed head coach Russell Domingo who took over the control from the strength and conditioning trainer Mario Villavarayan.

The opening day of the skill training camp began at the Sher-e-Bangal National stadium with Russell taking his charges into the drawing board to discuss his plan of action while Shakib approving it as the team leader before going into the nets to have some batting session at the center wicket of SBNS.

Shakib batted for quite some time in the nets before he decided to go into the dressing room to relax considering he was having kind of a jet lag due to his long flight.

Others were seen doing fielding session under the guidance of Ryan Cook as he also joined the preparation camp for the first time since it started weeks earlier with some of the batsmen getting some time at the center wicket.

After the skill camp was over BCB cricket operation chairman Akram Khan had a meeting with the coaches and national selectors along with Shakib.