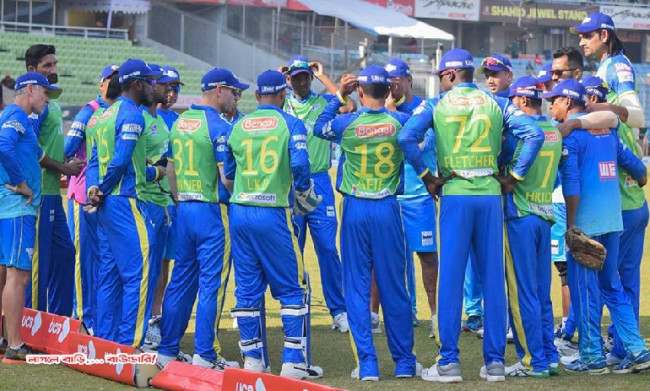 Bangladesh Premier League T20 franchise Sylhet Sixers said on Saturday that they have sorted out their payment dispute with BPL governing and looking forward to participate in the upcoming four-year cycle.

The series meetings in the BPL T20 between its Governing Council and franchises came to an end with the Sylhet meeting on Saturday.

We have sorted out our payment [dispute] and looking forward to take part in the upcoming cycle,’’ said Sylhet Sixers chief executive officer Yasir Obaid to the reporters at Sher-e-Bangla National Stadium on Saturday.

The BPL GC was mulling to introduce cycle regulations give the start of a fresh cycle and to reach common grounds, the governing council met the franchises of the tournament individually.

“We spoke of the grounds and match officials. We also spoke about the revenue like majority of the teams. We are now to write a written proposal to the BCB which will not only mention revenue signing but also of direct signing of the players, players’ retention policy for this year and years to follow,” said Yasir.

“What we basically want is continuity and a sustainable BPL model. The franchises spend a lot to run the teams and it will be quite a difficult job to run the team for the next four years. But we are all working together to make this entire tournament successful like it has been in the past seasons. Going ahead it is important to have a fixed schedule given we have the FTP till 2023. BCB should now be able to let us know when the tournament can be held in the coming years. When BPL clashes with other tournaments, it becomes difficult for us to plan and also get good players,” the Sylhet official added.

Majority of the franchises in the meetings demanded continuity of same rules from the last season in regards to the players. Sylhet Ceo Yasir echoed similar sentiment to that of the majority of the franchises. Following the meetings and statements of the franchises, it has turned only Dhaka Dynmaites look to be against the tide of the majority. Dynamites and Rangpur Riders has been at the epicenter of the ongoing saga following ace all-rounder Shakib Al Hasan’s sudden transfer. Earlier this month, Rangpur had declared signing of Shakib as category A+ player as they cricketer made a move from Dhaka Dynamites, a franchise that he has played for the last three seasons. The BPL GC almost immediately came motion and announced their decision of revamping rules and regulations.

“Rangpur [Riders], Comilla [Victorians] and other franchises have given their own suggestions to the BCB. We gave suggestions of our own which has been set following our internal discussions involving the team management and the owners of the franchise. Regarding retention, we agree the same to others given that it has been a successful model. But then again this tournament has lots of stake holders involved and there is now a discussion of bringing in new owners for Chittagong. So I believe BCB will come to a decision keeping all facts in mind. But whatever it is, the rules implemented will have to continue for next four or five years,” Yasir explained.

The BPL GC as informed earlier in now to have discussions of their own having noted observation of all the existing franchises. It is likely that after reaching a decision the BPL GC will once again sit for a common meeting with the franchises and draft the agreement to complete the renewal procedure with the franchises. Amongst the seven franchises from the last season, only Chittagong is in need of new owners after DBL Group decided to discontinue in the tournament.

The seventh edition of the BPL T20 is scheduled to start December 6 this year and have it’s players’ draft or auction by end of September or early October.