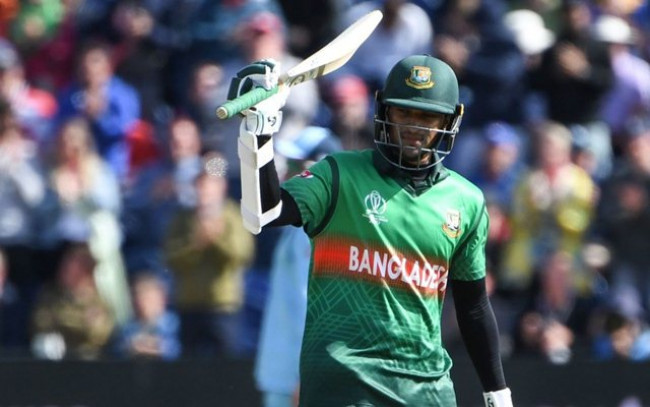 This World Cup seemed to turn to be a milestone tournament for Shakib Al Hasan, who played a sublime 99 ball-124 unbeaten knock to help Bangladesh achieve its second victory in the cricket’s biggest extravaganza.

In Bangladesh’s two victory in this edition, Shakib became the man of the match, with his match defining knock and energetic bowling, fielding. Against South Africa, he played a handy 75 runs knock to hold together the innings when momentum seemed to be snatched from Bangladesh.

He also struck two fifty plus knock, sandwiched by these two match-winning knocks, meaning his ninth ODI century is his fourth straight fifty plus knock in the World Cup, a feat that no Bangladeshi could achieve so far. And it should be noted, he also kept striking with ball at regular intervals even though this World Cup pitch have nothing for the spinners.

However Shakib Al Hasan became the only second Bangladeshi batsman after Tamim Iqbal to reach the milestone of 6000 runs during his 124 not out in crucial World Cup match against West Indies at the Coopers Associates County Ground in Taunton on Monday. The milestone became sweeter because he led from the front to help Bangladesh win it by seven wickets.

In form Shakib began the match with 23 runs shy of reaching the milestone and as he completed those runs chopping a length delivery off fast bowler Oshane Thomas to third man region for two runs.

As Bangladesh lost an early wicket in the chase of 322 runs when Andre Russell got the better of Soumya Sarkar with a short ball, Shakib gave the chase an impetus with free flowing batting alongside Tamim Iqbal.

Earlier he reached the milestone of 5000 runs and 250 wickets as the fifth cricketer of the world when he claimed the wicket of Aiden Markram in Bangladesh’s first match of the World Cup against South Africa. He achieved the feat faster than the other four cricketers—Sanath Jayasuirya, Abdul Razzak, Shahid Afridi and Jacques Kallis—who also hold this rare record.

Bangladesh’s fourth match against Sri Lanka was washed out due to heavy rain, which only could prevent Shakib from reaching some more milestones.

Before achieving the feat of 6000-run, Shakib claimed 2-54 with his wily left-arm spin that took his wicket tally to 28 in 25 matches of the World Cup. He now stands at eighth position in all time leading wicket-takers in World Cup amongst the spinners, surpassing Pakistani leg-spinner Mushtaq Ahmed (26) and Sri Lanka’s Sanath Jayasuirya (27).

Sri Lanka’s legendary off-spinner Muttiah Muralitharan is in the top place among the spinners with 68 wickets from 40 matches.