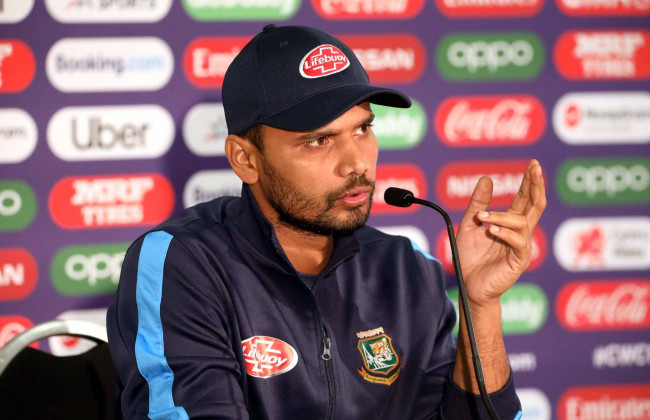 Bangladesh skipper Mashrafee bin Mortaza urged his teammates not to rely on other opinions when it comes to judging the behavior of the wicket and take decision on their gut feeling.

he playing surface in Taunton is quite green but that does not mean it will be a paradise for seam bowlers as traditionally it is touted as a batsman-friendly pitch and that seemed to have confused Tigers ahead of their game against West Indies.

Mashrafe said that since the player takes all the for poor performances, they should make the calls on the matter.

"There's confusion about the [Taunton] pitch as well. We heard it will be grassy but some are saying that it is usually a flat pitch. I think those who go out in the middle can assess it quicker since they end up getting criticized for the defeat. The behavior of a pitch changes as the match progresses. When you are playing in a ground like The Oval, you are likely to have in the back of your mind that there will be 330-350 runs," said Mashrafee.

“The team that correctly assesses the pitch faster, they will be ahead in the game. I think we misread the pitch in the New Zealand game [at The Oval]. If we had read the pitch right during that match, we would have targeted 260-270, and not 300-plus,’’ he said.

‘’It is hard to judge the pitch listening to the radio. They can only speculate and only comment on things as it progresses in front of them. I think those in the middle should make the decisions based on their judgment,’’ he concluded.