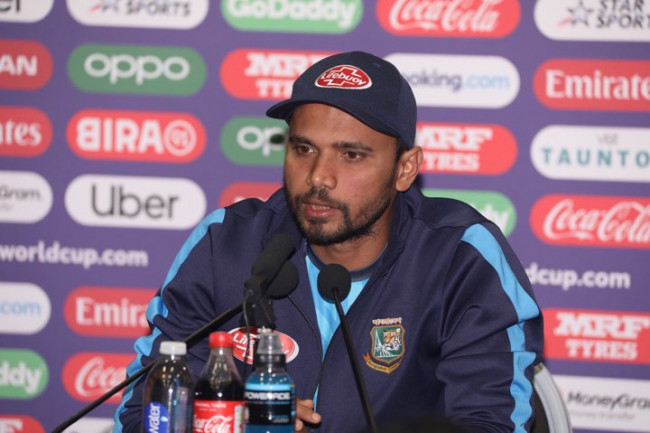 According to Mashrafe, the more they will play the shots, the more the opportunity will be created for Bangladeshi bowlers. He urged his side not to squander those chances when it comes to their way.

“The positive thing is that they will play their shots as much as they can, so we will have our opportunity. If we can take those chances (it will serve us better). There is no alternative to take wickets against them (right from the beginning),” Mashrafe said during the pre-match press conference at Taunton on Sunday.

Bangladesh will take on West Indies on Monday, which turned to be a must-win game for them.

“Those who play against West Indies, they plan how to neutralize their batting. They have the ability and they want to play in T20 brand of cricket always. So when they will become successful, bowlers’ task will be tougher.”

“So we have to be strict in our plan. Whatever the situation, we have to keep us calm. All day will not be good, sometimes bad day will come.”

As they play in T20 mode, there is possibility of shower of sixes in Taunton’s smaller ground if West Indies big hitter can get into their zone. But Mashrafe is unfazed by it.

“We have to bowl well and have to be careful so that they can’t make serious damage.”

“Even in the big ground, their miss hit turns out to be six. It will be six, whatever the size of the ground is, it can’t be 12. We also have the opportunity to hit sixes. It’s not that they will get out by giving catch in the boundary line. There are many ways to be out like giving catch at slip. So bowlers would have to bowl well.”