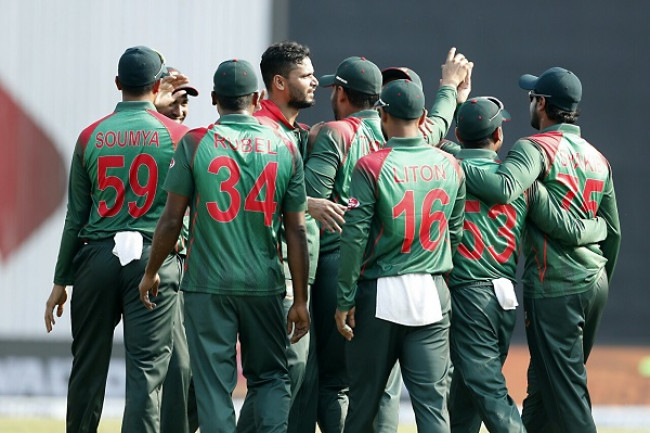 Cardiff has been in every Bangladeshi’s heart quite adorably. That Bangladesh saw its cricketing renaissance from this venue has given it a special place in country’s cricket folklore also.

Bangladesh’s cricket renaissance basically began from this venue when they stunned the then all conquering Australia by five wickets in 2005, which is still regarded as the biggest upset the cricket world has ever seen. A ground, located at Wales, Cardiff is also the venue from which they announced their status of true cricketing giants as they beat New Zealand by five wickets to make the ICC Champions Trophy semifinal in 2017.

Few believed Bangladesh would chase down the target of 266, after being reduced to 33-4. Shakib Al Hasan and Mahmudullah Riyad put up an astonishing 224-run partnership for the fifth wicket to win the game quite dominatingly, a victory that established them as the giants of cricket from a cricketing team a force to reckon with.

Bangladesh played just those two matches in venue and won those two to keep a hundred percent winning record here.

If those two matches defined Bangladesh of what they are now, their third match of the World Cup in which they are set to lock horns with hosts and tournament favourite England in this venue presents them the chance to keep them alive in the race of semifinal.

But England would pose different and bigger challenge considering they are playing at the home and also the favourties of the tournament despite losing their last game to Pakistan by 14 runs. That they were chasing a target of 349 runs against Pakistan and fell short of 14 runs spoke a volume of how strong side they are. They are the team compiling and chasing 300 plus total at quite regular basis since the 2015 World Cup, an event that was nightmare for them, basically for Bangladesh.

The Tigers led their exit from that event, winning the match by 15 runs and it created a huge uproar back at their home that forced the England think-tank to bring wholesale changes to their white-ball cricket method.

However it paid dividends but Eoin Morgan’s side would never forget the humiliation at the hands of Bangladesh. And even they won one match against Bangladesh in World Cup out of three, that too in 2007. They were beaten by Bangladesh in 2011 and 2015 World Cup, meaning they wouldn’t like to make it third straight World Cup defeat.

So when stake is high for England, question has come to the fore, can Cardiff be happy hunting ground for Bangladesh once again!

In their first two matches at The Oval, located in South London, against South Africa and New Zealand but got the backing of expatriate Bangladeshis ho outnumbered other countries fans to literally make the ground a sea of red and green. Expatriate Bangladeshi fans are expected to get behind Bangladesh when they take on England at Cardiff as they started reaching Cardiff from different parts of England. But it is to see whether they can outnumber English fans in Cardiff.

However whatever it is, Bangladesh are oozing with confidence as they believe they have the ability to beat any team in any place of the World. And they have already proved it is exaggerated confidence. Bangladesh beat South Africa by 21 runs, after posting their ODI highest 300 and with just 244 on the board in batting-friendly surface they showed their bowling prowess against New Zealand before losing it narrowly by two wickets.

“Whoever it is, we know if we can play to our potential, we have the ability to beat any side of the world. We can take the equation of venue, wicket and others out if we play to our true potential,” said Bangladesh captain Mashrafe Bin Mortaza.

“I don’t like to think what happened in the past. Every match is new one, we take every game one by one. The target is to play our best and win the game. That’s it.”