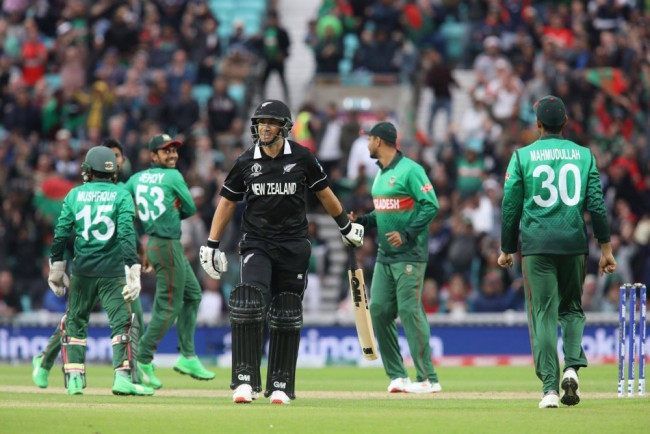 Bangladesh fought like a wounded Tigers against an inform New Zealand side before going down to two-wicket in a nail-biting World Cup game at The Oval on Wednesday.

Mashrafe’s side paid heavily for missing to inflict a run-out on Kane Williamson who forged a match-defining partnership with Ross Taylor for the second wicket to eventually script his side’s second straight victory.

It was Bangladesh’s first loss after their 21-run victory over South Africa.

As New Zealand were struggling with 61-2 in 11 overs, Williamson who was on 8 then responded a quick single from Ross Taylor, only to find him a mile away from the crease but to the dismay of Bangladeshi fans wicket-keeper Mushfiqur Rahim who was closer to wicket dislodged the bails by his elbow before the balls came to his gloves.

Williamson looked rusty but somehow found his way to score an invaluable 40 but most importantly accompanied an inform Taylor for a 105-run partnership, helping his side reach the target in 47.1 overs, making 248-8. Taylor made the highest 82 and it turned out to be the difference.

Bangladesh’s total was not daunting but with pitch getting slower, their prospect looked bright.

Martin Guptill and Collin Munro made a whirlwind start but Shakib Al Hasan removed both of them, leaving New Zealand tricky 55-2 in 10th over. Had Mushfiqur didn’t make the mistake to inflict run-out on Kane Williamson, Bangladesh could have been in position of dominance by then.

But Williamson and Taylor combined for an important partnership, keeping the side on track of facile victory. However Bangladesh refused to give up.

They hit back in style with off-spinner Mehidy Hasan Miraz dealing double strike to get the better of Williamson, who looked shaky throughout his innings and Tom Latham for naught in five balls.

Taylor looked adamant until Mushfiqur decided to amend his mistakes. He took a fine catch of Mosaddek Hossain bowling to remove Taylor and the things turned around dramatically.

With Saifuddin joining the party, Bangladesh kept coming back while the Kiwis lower order put up admirable fight. Eventually, Taylor and Williamson’s partnership kept them ahead as the New Zealand lower order had no tension of asking run rate. They stayed come and Mitchell Santner drilled Mustafizur Rahman through cover for a boundary to seal the game.

Santner was not out on 17. Guptill and Jimmy Nisham made identical 25 to contribute in team’s nervy victory.

Being sent to bat first, terrorized by Kiwis fast bowlers’ express pace and short balls, Bangladesh were wrapped up for 244 in 49.2 overs. Shakib Al Hasan battled lonely for the side with 68 ball-64 before claiming two wickets in a gem of all-rounder performance but in vain.

When Shakib’s calculative aggression forced the Kiwis bowlers alter their plan, he literally got no support from the other batsmen, who were humbled by the barrage of short deliveries.

Saifuddin hit some lusty blow towards the end to help the side put up a fighting total, hitting 23 ball-29. Mohammad Mithun chipped-in-with 26.

Fast bowler Matt Henry did the most damage of Bangladesh, claiming 4-47 while his new ball partner Trent Boult snapped up 2-44 as they used the short stuffs to precision.

Searching for early help in an overcast condition, New Zealand skipper Kane Williamson opted to bowl first but Bangladesh made a steady start, defying Henry and Boult who were express, extracted bounce and swung the ball admirably.

Tamim Iqbal and Soumya Sarkar dealt with the bounce and swing of Henry and Boult astutely to keep Bangladesh on track before a loose shot from Soumya against Henry ended the 45-run partnership after the opener made a run-a-ball-25.

As the pitch looked easier after 10 overs, the Kiwi fast bowlers employed a strategy of unsettling Bangladesh batsmen with a barrage of short balls and it worked tremendously well.

Shakib though seemed to come from different planet. He struggled initially but three successive four off Jimmy Nisham set him nicely in the crease as he seemed to have found the impetus that he was looking for.

A mix-up between him and Mushfiqur Rahim brought a run-out dismissal of the latter for 19 off 35, leaving Bangladesh in a state of danger.

Shakib cut one past point off left arm spinner Mitchell Santner delivery for three runs to reach his second consecutive half-century in the tournament.

The situation got worsened when Shakib was dismissed by Collin de Grandhome after trying one to cut that didn’t give him much width.

Shakib’s dismissal titled the match towards Kiwis whose bowlers got pumped up more.

Mohammad Mithun and Mahmudullah had much to prove when they got the onus but they failed to pay it off, specially Mahmudullah’s struggle against short balls looked nasty. He was eventually out on 20 off 41.

Mosaddek Hossain was also vulnerable against short balls but Saifuddin somehow dealt with the Kiwi fast bowlers to take Bangladesh closer to 250, which looked distinctively unlikely at halfway through the innings.