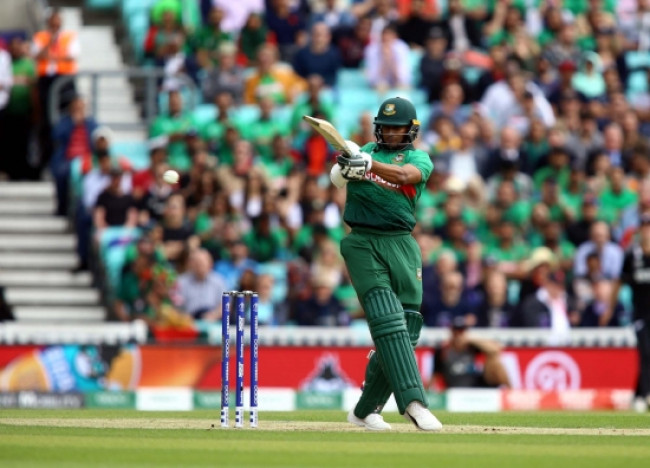 Bangladesh batsmen found them in wanting against the short balls of New Zealand fast bowlers and were wrapped up for 244 in 49.2 overs in their second match of the ICC Cricket World Cup at The Oval on Wednesday.

Shakib Al Hasan was the top-scorer of the side with 68 ball-64, which was his second straight half-century in the tournament but no other batsmen could accompany him aptly. Saifuddin hit some lusty blow towards the end to help the side put up a fighting total, hitting 23 ball-29. Mohammad Mithun chipped-in-with 26.

Fast bowler Matt Henry did the most damage of Bangladesh, claiming 4-47 while his new ball partner Trent Boult snapped up 2-44.

Bangladesh made a steady start despite New Zealand skipper Kane Williamson expected some early bite in the wicket and therefor opted to bowl first.

Tamim Iqbal and Soumya Sarkar dealt with the bounce and swing of Matt Henry and Trent Boult astutely to keep Bangladesh on track before a loose shot from Soumya against Henry ended the 45-run partnership after the opener made a run-a-ball-25.

As the pitch looked easier after 10 overs, the Kiwi fast bowlers employed a strategy of short of unsettling Bangladesh batsmen with a barrage of short balls and it paid the dividends.

Shakib though seemed to come from different planet. He struggled initially but three successive four off Jimmy Nisham set him nicely in the crease as he seemed to have found the impetus that he was looking for.

A mix-up between him and Mushfiqur Rahim however brought a run-out dismissal of the latter for 19 off 35, leaving Bangladesh in a state of danger.

The situation got worsened when Shakib was dismissed by Collin de Grandhome after trying one to cut that didn’t give him much width.

Shakib’s dismissal titled the match towards Kiwis whose bowlers then used the short balls to precision, much to the discomfort of the Bangladeshi batsmen.

Mohammad Mithun and Mahmudullah had much to prove when they got the onus but they failed to pay it off, specially Mahmudullah’s struggle against short balls looked nasty. He was eventually out on 20 off 41.

Mosaddek Hossain was also vulnerable against short balls but Saifuddin somehow dealt with the Kiwi fast bowlers to take Bangladesh closer to 250, which looked distinctively unlikely at halfway through the innings.