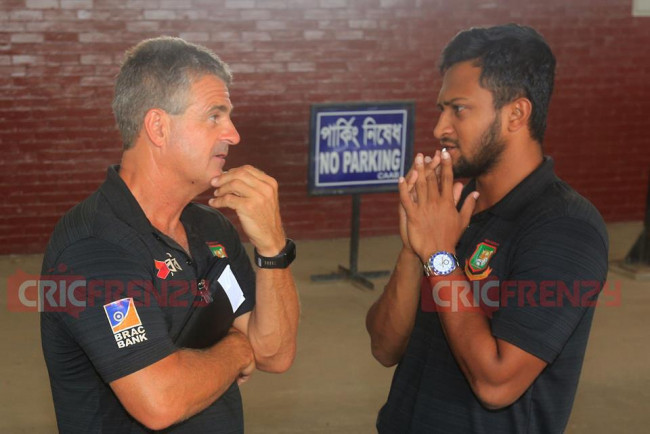 Just ahead of the World Cup,  Bangladesh head coach Steve Rhodes said Shakib Al Hasan has got the things to prove in the World Cup. But if Shakib’s version is to be taken, it seemed Rhodes was misquoted by the media.

“I don’t think he said anything in such manner [that I need to prove something]. What he meant was that I am very eager to perform. He is very close to me and he did not say anything other than that,” Shakib said after Bangladesh’s 21-run victory over South Africa.

However it was reported earlier that Rhodes challenges Shakib to prove his top dog status.

“Shakib is fine,” Rhodes was quoted as saying by ICC after Bangladesh’s washed out warm-up game against Pakistan in Cardiff.

“He’s in a great position physically. He had a little problem in Ireland but he’s got over that and is raring to go.

“He’s looking forward to a wonderful tournament. I think he’s got a bit of a point to prove and he probably thinks that as well.

“He seems to have been a little bit forgotten but now he’s back as the world’s No.1 all-all-rounder in ODI cricket - and that’s where we think he belongs.

“But he’s got a point to prove to make sure everybody else believes that.”