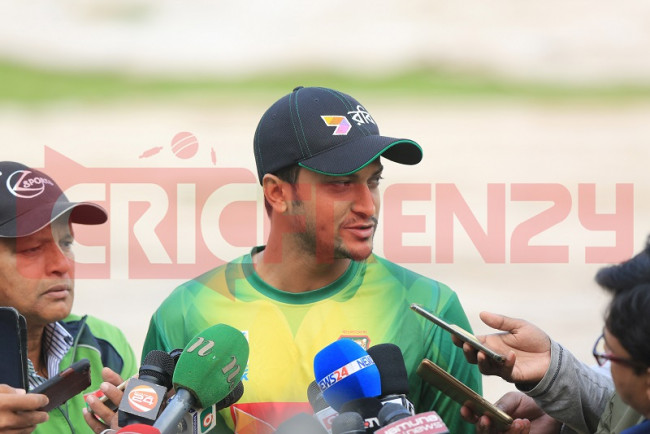 Shakib Al Hasan believed Bangladesh will start as underdog against New Zealand in their next match despite their facile victory over South Africa in the World Cup opener on Sunday.

But that doesn’t mean Shakib didn’t believe that Bangladesh can’t win against New Zealand. He stressed upon the needs to play to their full potential to win the game.

“We are not favourite against New Zealand as they are a very tough opposition and they do well in the ICC events. We have to play our best with them. We will have confidence but they also won by 10 wickets. If we can play to our potential we hope to win,” he said.

“See we want to say Bangladesh is a big team but others don’t take that seriously. We have something to prove from that perspective. This start will help us mentally and if we can play like this we can go a long way.

To win against New Zealand, Shakib wants a start that the openers gave them against South Africa.

“I think the start gave us some kind of relief in the dressing room as they started very positively scoring 55 to 60 runs in eight or nine overs. It gave us confidence and the other batsmen of the team. Afterwards when Mushfiq bhai came I said that the wicket was good and we can score runs if we can just take our time in the middle,” he said.

And the victory against New Zealand is imperative too as Bangladesh want to do something very special in this World Cup.

“We don’t want to end the journey like other World Cup as we want something more than that. Because we started well it gives us an advantage but we still have eight matches to go,” he added.

“Format in this world cup is different. May be bit more experience now. I think it will be a very good tournament. You know formation is difference where everyone will play each other. So it will be a tough challenge for all the players. Not individual or any particular team. It will be a challenge for the players. You know bowlers or batsman either way they will try to find your weakness or strong point and they will plan accordingly. So have to adjust so many things during this nine games, ten games or eleven games whatever you play. In that prospective I think it’s very very important tournament.”