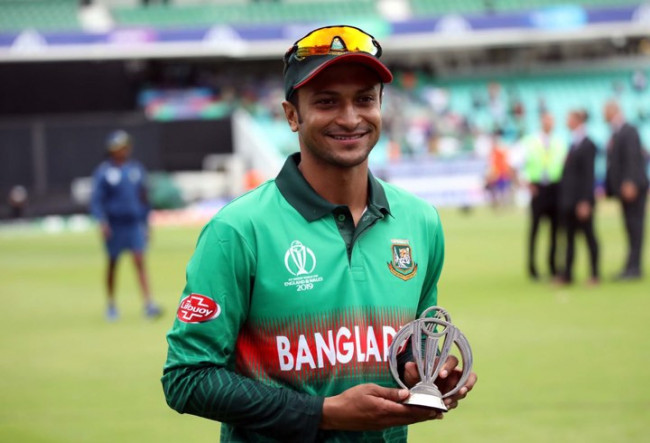 Shakib Al Hasan revelled in his formidable double act with Mushfiqur Rahim after Bangladesh secured a 21-run victory in their World Cup opener against South Africa.

Put into bat against a usually daunting Proteas attack, Shakib and Mushfiqur led the charge for the Tigers, putting on 142 for the third wicket as part a record ODI total of 330 for a Bangladesh side.

The pair, who have also shone in tandem at Test level, first forged their special bond playing in age-group sides together as youngsters.

And with all-rounded Shakib now batting higher up the order at No. 3, that shared experience is now paying dividends for the long-time colleagues.

“Me and Mushfiq have had some very good partnerships. Even in Tests we have the highest partnership for Bangladesh,” Shakib said.

“Because we’ve been playing together since under-15, we know each other well and complement each other. That’s the key.

“It’s good that I’m giving the innings that are needed for the team.”

A key contributor with bat and ball, Shakib became the fastest player to reach 250 ODI wickets and 5,000 runs when he snared Aiden Markram early on in the South Africa response.

Joining an exclusive club also featuring Jacques Kallis is a dream for any player, but the talented all-rounder insisted records come secondary to helping the team achieve success.

“I’m very happy the way I contributed,” he added. “If I do that for my time, the stats will take care of themselves.

“I don’t normally look at it, but if people are talking about it, I obviously feel happy."

Ranked seventh heading into the competition, attention for the Tigers now turns to highly-rated New Zealand on Wednesday.

Trent Boult and co present fierce opposition, but with the wind in their sails, Shakib believes Bangladesh will be a match for any side in the competition.

He said: “Building up to this World Cup, we knew what challenges we might face. We prepared well, so that gave us a lot of confidence and belief.

“We came to this World Cup wanting to do well. We are up for the challenge but at the same time we are relaxed. We knew we had the skill to beat big teams.”