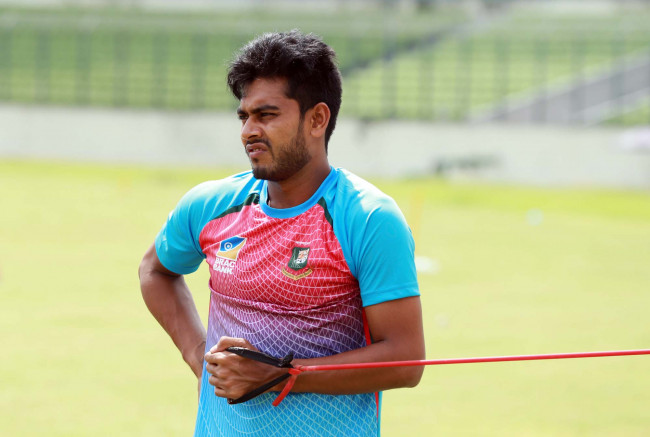 Bangladesh's trump card at the ICC Men’s Cricket World Cup 2019 is the wealth of experience in their squad combined with the quality their youth, according to Mehidy Hasan Miraz.

The team that beat South Africa by 21 runs at the Oval featured four players who have played in four World Cups each - captain Mashrafe Mortaza, Shakib al Hasan, Mushfiqur Rahim and Tamim Iqbal - and one player, Mahmudullah, who has played in three World Cups.

The group also features several players making their World Cup debuts such as Mehidy, Mustafizur Rahman and Mosaddek Hossain, who are making the most of the opportunity to play among some of their country’s big names on the biggest stages.

“We have four senior guys who have a lot of experience; guys who have played in many World Cups and we have a lot of belief coming from that. And then our junior guys have also performed strongly,” Hasan, who at 21 years old is one of Bangladesh’s younger players, said.

“There is good communication between our senior and junior guys. It’s a good sign for our country.”

“I am really excited today because I have always watched the matches on TV, like in the last World Cup and now, in this World Cup, I am part of it.”

Not only did Mehidy make his tournament debut against South Africa at the Oval but he also opened the bowling and was Bangladesh’s most economical performer. In his 10 overs, Mehidy conceded only 44 runs and claimed the biggest opposition scalp, that of captain Faf du Plessis.

Though there was not much turn on offer, Mehidy said he concentrated on containing and building up pressure and the plan paid off.

“The wicket was a little bit slow. I was thinking about bowling dot balls and good areas. I tried to keep a tight length and got success,” he added.

Mehidy’s stand-out performance with the ball came after a sterling effort with the bat which saw Bangladesh post their highest-ever ODI total.

Soumya Sarkar blazed 42 off 30 balls, Shakib and Mushfiqur scored a half-century each and Mahmudullah finished with 46 off 33 balls. That type of contribution from all quarters is what Bangladesh are looking for as their campaign builds.

Although Bangladesh are not talking up their win over South Africa as a surprise, it come as such because of their positions on the rankings. Bangladesh sit at No.7 while South Africa are No.3 but Mehidy believes that on the day, anyone can win.