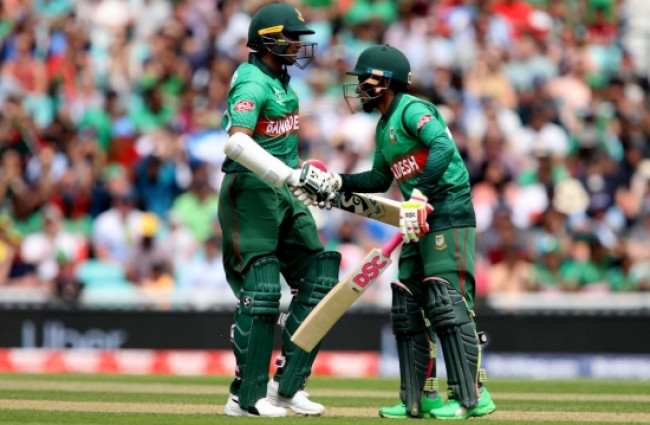 Mushfiqur Rahim and Shakib Al Hasan struck half-century each as Bangladesh racked up 330-6 in their World Cup opener against South Africa at The Oval on Sunday.

This was Bangladesh’s highest score in their ODI history, eclipsing 329-6 against Pakistan in Dhaka in 2015 and only second score over 300 in the cricket’s biggest extravaganza.

Mushfiqur Rahim smashed 80 ball-78 with eight fours while Shakib hit 75 off 84, clobbering eight fours and one six. The duo shared 142-run for the third wicket partnership, Bangladesh’s highest in the World Cup, to set the platform upfront. Mahmudullah Riyad hammered a whirlwind 33 ball-46 not out towards the end to help the side post their first 300 plus score against South Africa

South Africa’s decision to bowl first backfired as Soumya Sarkar and Tamim Iqbal gave the side a fluent start, taking the Proteas bowlers with absolute ease. Tamim looked little rusty though, particularly after coming off from a wrist injury but Soumya Sarkar was at his destructive best.

He sent the South African new ball bowlers—Kagiso Rabada and Lungi Ngidi in receiving end, brining up boundaries more often than not that sent the packed Oval, largely occupied by the expatriate Bangladeshis, into wild jubilation.

The Oval in fact turned out to Bangladeshi stadium practically, being entirely covered by red and green jersey to outnumber the South African fans. And Soumya gave them an occasion to exalt again and again.

However the breakthrough came from first change bowler Andile Phehlukwayo who had Tamim caught behind by Quinton de Kock for 11. Tamim’s departure was not shock indeed the way he was playing but the real blow for Bangladesh came courtesy to Chris Morris, who used the short ball to precision to get the better of Soumya.

But Shakib and Mushfiqur Rahim came up with some sterling performance, showing as to why Bangladesh are expecting to seal the semifinal berth despite the cricket pundits around the world didn’t endorse it.

The duo firstly set them on the back of some smart cricket, stealing singles and punishing the bad balls with utmost disdain.

South African bowling attack is considered as one of the best attack in this World Cup but here they looked totally clueless when Shakib and Mushfiqur chose to attack them. They in fact became one bowler short when Ngidi had to be taken off with hamstring injury. Before then he bowled four overs.

Shakib however first to raise his 43rd fifty with top-edge pull for extra cover boundary off Chris Morris and grew with confidence. Mushfiqur also brought up his 34th fifty with a boundary—through cut past cover point before he and Shakib combined for their fifth century partnership in ODI cricket.

As they looked more threatening, South Africa finally got the much-cherished breakthrough with leg-spinner Imran Tahir who brought an end to 142-run partnership, dismissing Shakib with a full delivery. The 142-run is now Bangladesh highest partnership for any stands in World Cup, eclipsing 141 by Mahmudullah Riyad and Mushfiqur Rahim against England in Adelaide in 2015 World Cup.

After hitting 75 off 84 with eight fours and a six, his best World Cup score, Shakib tried to sweep Tahir, only to see his stump crashed. Tahir then blew Bangladesh further, dismissing Mohammad Mithun for a run-a-ball-21.

However still Bangladesh looked a side to get past 350 for the first time in the history, as Mushfiqur played with a mix of caution and aggression. However Andile Phehlukwayo removed him after he scored 78 off 80 with eight fours. His dismissal effectively ruled them out that possible but Mahmudullah Riyad and Mosaddek Hossain Saikat propelled Bangladesh past 300.