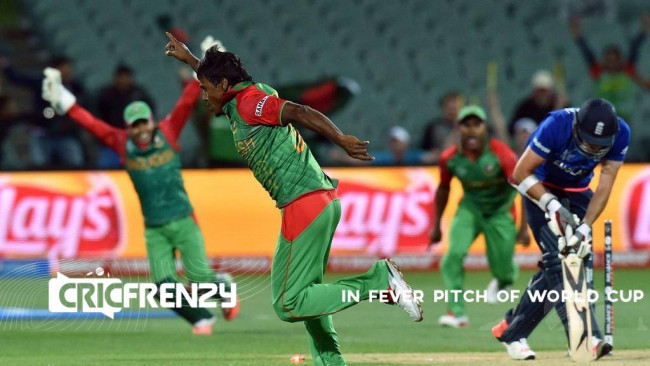 Bangladesh won 11 matches after playing 33 games so far over the past five World Cup appearances (1999-2015). There was some breathtaking victories to go with some disappointing losses but that they ended up winning three matches in past three events in a row, spoke a volume of how they found the cricket’s biggest carnival to their likings. With another World Cup approaching closer, the Cricfrenzy will take you down to the lane of the memory of Bangladesh’s past five World Cups. Here’s the fifth and last installment.

Bangladesh have been evolved as a team to beat the top guns regularly from a team with occasional flashes of brilliance by the time when 2015 World Cup kick-started. Led by Mashrafe Bin Mortaza, Bangladesh set a winning culture and habit in the team.  Mashrafe was given captaincy in mid-2014, following a poor patch, when Bangladesh somehow used to loss the match from a good position and that became a recurring problem. Mashrafe’s Midas touch solved the problem almost in overnight, making Tigers a force to reckon with.

However that they are the team to beat should be proved preciously and no other stage than the 2015 World Cup in Australia-New Zealand could make it. So the thunder was expected at the Down Under.

Bangladesh truly lived up to the expectation by reaching the quarterfinal stage of the cricket’s biggest extravaganza for the first time. For the first time they played a knock out match of the World Cup and being engaged in a no-ball controversy. Still the Bangladeshis believe they could beat India to make the semifinal of that World Cup should umpire not called the Rubel Hossain delivery a no-ball with which he got Rohit Sharma, who went to hammer 126 ball-137 to script Bangladesh’s exit eventually.

However Bangladesh’s calculation towards making the quarterfinal stage was clear.

Their plan was to beat less fancied Afghanistan and Scotland but target at least one of the four formidable opponents in their pool co-hosts Australia and New Zealand, Sri Lanka and England to secure a place in the knockouts. The viable option was England given their vulnerability against spin that time. Moreover Bangladesh beat England in 2011 World Cup and therefore they were oozing with confidence. And rightly everything went on as per the script.

Bangladesh mission started by taking on Afghanistan, a team popularly considered as tougher for the Tigers, even though captain Mashrafe Bin Mortaza refused to give the Afghans a though ahead of the World Cup.

Since Afghanistan beat Bangladesh in some matches before the World Cup, this was billed as tougher game for Bangladesh but the way the Tigers made it one-way traffic, indicated that they are really destined for bigger things. Thanks to Mushfiqur Rahims 71 and Shakib Al Hasan’s 63, Bangladesh piled up 267, which not looked enough in a flat pitch against a spirited side, who made their first appearance in cricket’s biggest extravaganza with this match. But what transpired later showed why Mashrafe is considered as the most inspirational captain of the country. The captain led the side from the front, claiming 3-20 in a gem of pace bowling to bundle Afghanistan out for 162. In doing so he shut the mouth of the Afghans who roared relentlessly ahead of the World Cup by publicly announcing that they would beat Bangladesh.

The Tigers’ next match against Australia was called off without a ball being bowled due to heavy thunderstorm. The points were shared, raising Bangladesh’s hope to make their dream true.

Bangladesh proved them vulnerable against Sri Lanka in World’s biggest stage once again, conceding a 92 runs defeat. Sri Lanka racked up 332-1 after which Bangladesh were bowled out for 240 in 47 overs.

The match against Scotland afterwards was the game that Bangladesh targeted to win apart from Afghanistan and they did it duly even though they need to chase down their highest total. It remains so far Bangladesh’s highest total in chase also. Scotland, powered by Kyle Coetzer's magnificent 156, compiled a heft 318- 8 in 50 overs but lost their best chance to win a World Cup match. To counter Coetzer, Bangladesh's senior firm - Tamim Iqbal, Mahmudullah, Mushfiqur Rahim and Shakib Al Hasan - struck fifties to complete the victory. Tamim Iqbal came close to be the first Bangladesh batsman to hit a world cup century but he squandered the chance to be out on 95. However his 95 paved a well platform, riding on which, Mahmudullah Riyad struck 65, Mushfiqur blasted 60 and Shakib hammered an unbeaten 52 as Bangladesh effortlessly gunned down the total to make 322-4 in just 48.1 overs.

With two wins against Afghanistan and Scotland and a shared point against Australia took Bangladesh on the verge of making their dream true. Knowing that a victory against England would seal their spot in the final, they came up all guns blazing such way that their life was depending on this match. Standing on the brink of the history, they produced one of their most groundbreaking performance to beat England and thereby completed their second successive victory against the English side in World Cup. Mahmudullah Riyad became the first Bangladeshi batsman to score a century in World Cup, what eluded Tamim Iqbal in the previous match, giving the nation an occasion to exalt. Fast bowler Rubel Hossain 4-53 was similarly significant in helping Bangladesh to win the game.  In a see-saw chase England made a mess of chasing down the target of 275 and eventually fell 15 runs short.  This was, arguably, the most important win in Bangladesh’s cricket history and also considered as most exciting cricket victory by ICC.

Bangladesh moved to the quarterfinal for the first time and found India as their opponent. The passion was as palpable as it was always against India. The whole Bangladesh started believing that they would beat India to reach semifinal. The players looked confident to extend the dream run but the eventful match came to an end with Bangladesh’s 109-rund defeat to India.

But more than the result of the match, the umpiring issue came to the fore. Rage in social media continued to mount over the no ball issue.

A controversial decision by square leg umpire Dar first outraged the fans as he called a no-ball for the delivery's "excessive height" as Imrul Kayes came forward from deep and claimed a catch of Rohit Sharma, who was then on 90. Sharmar went on to score 126 ball-137 with 15 fours and three sixes as India plundered 147 runs in the last 15 overs to pile up 302-6 in 50 overs. Mentally down by no-ball issue, Bangladesh were all out for 193 in 45 overs.

Furious fans continued to ventilate their rage in the social media like Facebook a day after hundreds supporters staged protest marches at different parts of the country including the premier Dhaka University campus where they also burnt an effigy of Pakistani umpire Aleem Dar.

Former Australian leg-spinner Shane Warne, who was on commentary at that time, said: "that should have been a wicket. The ball was under the waist".

Bangladesh was unable to review the decision, having suffered a line ball LBW review failure earlier in the innings.

However Bangladesh’s dream run ended in disappointing fashion but they left the tournament, holding their head high. By doing so they finally established them as the true cricket giants of the world.