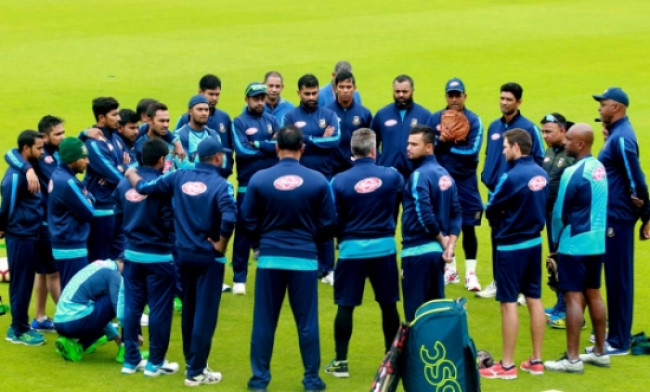 Bangladesh might be ravaged by injury to key several players but that couldn’t dampen the mood in the dressing room as the players looked determined to come all guns blazing against South Africa on Sunday at The Oval. The match starts at 3.30 PM BST.

They are seeking a winning-start as the journey towards the semifinal begins from this very match.

“We just have to enjoy and play our cricket. Although the guys lost the last practice match but we know we are in a good shape and we have practiced pretty well,” Bangladesh pace bowling coach Courtney Walsh said.

“We can have good days and bad days but you want to have more good days than bad days. The confidence of the individual players have been very high, the guys have been enjoying their practice session you can see that in their body language. The guys are keen to do well, everyone wants to do well for the Bangladesh cricket as its the World cup.  I am excited for Sunday and hoping that we can get a very good start.”

While the team’s batting bedrock Tamim Iqbal’s participation in the team’s World Cup opener remains uncertain following a wrist injury, Bangladesh also have fitness concern of Mohammad Saifuddin, who is recovering from a back problem, along with captain Mashrafe Bin Mortaza (hamstring), Mustafizur Rahman (calf) and Mahmudullah Riyad (shoulder). Shakib Al Hasan suffered a back spasm recently but is expected to be back to full fitness.

No fracture was found in Tamim’s injured wrist but there was swelling in the place, which may discourage the team management to risk with him in this sort of long tournament.

After being flayed by hosts and tournament favourite England in the first match, South Africa will look to get first points under the belt. South Africa also have injury concern of Hashim Amla but he should be okay ahead of Bangladesh’s match.

Bangladesh’s first warm-up game against Pakistan was washed out and they lost the second practice game to India by 95 runs but still they are high on confidence, specially after lifting the tri-series trophy in Ireland, which was their first major trophy in a tournament involving three or more teams.

What would please Bangladesh that they became unbeaten champions there and several players showed not only strong performance but they were so consistent that Bangladesh are in sweet problem to fix the starting XI despite injury concern.

While Bangladesh’s top order has been amongst runs, the middle order led by Shakib Al Hasan and Mushfiqur Rahim looked settled. Mahmudullah Riyad, Sabbir Rahman and Mosaddek Hossain Saikat time and again proved them they have the ability to give late impetus which would imperative in propelling the team past 300 runs.

But Bangladesh may enjoy their greatest advantage in bowling. Despite the injury concern it looked Mashrafe and Mustafizur Rahman would play the place, like they played the warm-up match against India with same condition. Even though the World Cup is said to be a run-fest, The Oval pitch showed a tendency to be slow, much like Bangladeshi wicket and if so, Bangladesh can replicate the performance of 2007 World Cup when they beat South Africa in Super Eight stage, capitalizing the slow Guyana wicket.

“It’s a wicket that we know,  we have played on that type of wickets as they (South Africa) played yesterday. So, it could be very good for us,” said Bangladesh’s pace bowling coach Courtney Walsh.

“At the Oval you normally get good cricket wickets and we are expecting good sporting stuff. So, we are expecting a very good game, the wicket should play very good. It might help both of the departments, in terms of bowling, it should have a bit spin and a bit of pace.  We saw how it played yesterday so we know how it could play on Sunday.  Its couple of days away and it’s a used wicket so we have to take that into consideration.”

Bangladesh in fact won just one match against South Africa in World Cup while lost two including being all out for 78 in Dhaka in 2011 World Cup. In overall head-to-head battle, South Africa has the massive advantage of winning 17 matches in 20 encounters. Bangladesh won just three, of which two came in 2015 home series when Bangladesh beat the Proteas by 2-1 for the first time in bilateral series.

With Saifuddin, Tamim Iqbal looking uncertain, Bangladesh can bring up some changes in the best XI, depending on the condition and the strength of the team.