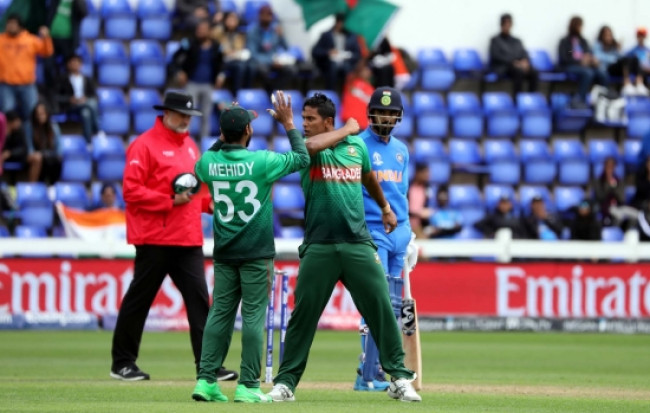 Bangladesh bowlers’ clueless bowling allowed India to pile up a staggering 359-7 despite a shaky start in the second and last warm-up game on Tuesday at the Sophia Gardens in Cardiff.

India basically rode on the century of KL Rahul and MS Dhoni, who powered India when a score above 300 looked distant dream. Dhoni smashed 77 ball-113, hammering eight fours and seven sixes while Rahul smote 12 fours and four sixes in his 99 ball-108.

They shared 164-run for the fifth wicket, riding on luck and pluck to rally India and most importantly gave India relief when they were so concerned about their middle order.

The duo was key in helping India plunder 116 runs in the last 10 overs and 79 in last five overs.

When Bangladesh chose to bowl under the overcast condition and claimed these three prized scalps before India crossing 100 runs, it seemed to be Bangladesh’s game.

A spell of shower though halted the game for 15 minutes after first two deliveries. The game restarted after the rain stopped and Bangladesh got the massive breakthrough when Mustafizur had Dhawan leg-before fore 1. Rohit struggled much before being out Rubel Hossain for 45 ball-19.

Virat Kohli however looked the player from another planet despite initial struggle. He paced the innings even though other batsmen around him looked shaky.

Saifuddin rattled the stump of Kohli after he struck 46 ball-47, much to the euphoria of the Bangladeshi fans.

As Bangladesh looked dominant side, Rahul, a contender for No.4 spot of India and MS Dhoni revived the innings in style and gradually threw Bangladesh out of the match.

Rahul fell in a modest delivery of Sabbir when he tried to pace the innings further but Dhoni kept the run flowing before he was out in the last over.