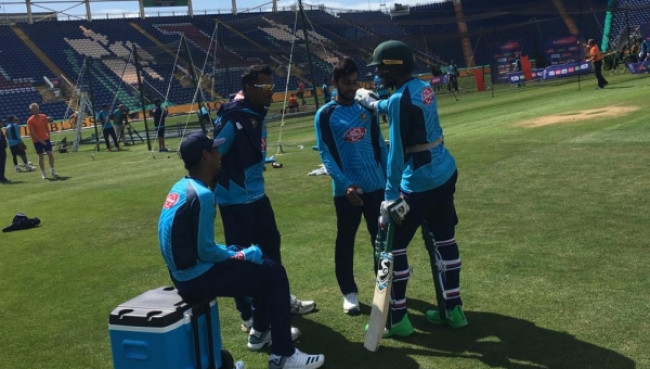 Bangladesh will get their last chance to have some practice game under the belt ahead of the ICC World Cup when they take on India at the Sophia Gardens in Cardiff on Tuesday. The match starts at 3.30 PM (Bangladesh Standard Time).

They would just hope the rain to stay away after experiencing a washed-out game against Pakistan on Sunday.

Bolstered by their recent performance that saw them becoming an unbeaten champion in tri-series tournament in Ireland, Bangladesh hoped to keep up their winning spree and want to get into the cricket’s biggest carnival with perfect record. But the rain intervened in their first warm-up game against Pakistan, forcing the cancellation of the match without a ball being bowled.

That effectively not only ruined their hopes to keep the winning spree but also dented the planning to further tune the combination and found the loopholes, which should be plugged.

It might be just warm-up game on paper and has no ODI status, but Bangladesh had already ruled out of any experiment, stressing on the needs to keep the winning-streak intact.

India however will pose even bigger challenge, despite the fact that the sub-continent giants lost their first warm-up game to New Zealand by six wickets. Given India is widely recognized as the top favourites to win the most coveted trophy along with hosts England, Bangladesh have much to earn, little to loss.

A victory against India, the red-hot favourite, will not only boost their confidence but also help them send an SOS to the other big guns and subsequently it truly would help them to prove their hope to break into the semifinal of World Cup is not exaggerated ambition.

Bangladesh so far won five matches against India in official one-day, in contrast of losing 29 matches out 35 encounters between the two teams. They have also sweet memory to win a bilateral series against India just after the 2015 World Cup when they hosted the closed-door neighbour and won the series by 2-1.

There was frustration then. After that historical series victory, Bangladesh never won against any match in any format against India. But there were some encouraging stats too: After their defeat to India by eight wickets in the 2017 ICC Champions Trophy, Bangladesh came close to beat India every match they played against them.

So the match against India is the match for them to show that they really are no longer a ‘no match’ for India. But keeping aside those factors, the players were desperate to get a game under the belt ahead of the World Cup too after the first match was washed out.

“It is disappointing that the game against Pakistan was washed out but we have no control over rain. We have another Warm up match against India. We will take our full preparation for World Cup in that match,” said Mosaddek Hossain Saikat, the hero of tri-series final.

For some players, a warm-up game is imperative to show their mettle also.