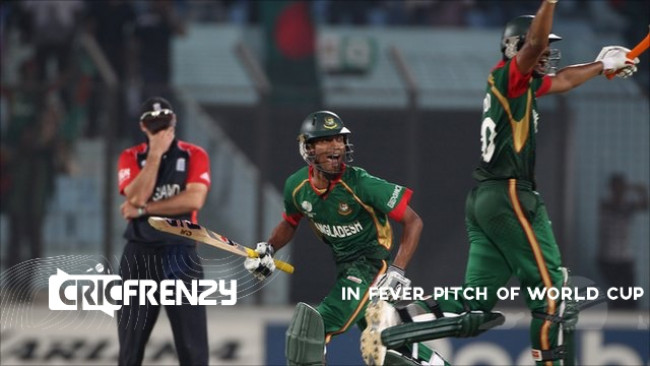 Bangladesh won 11 matches after playing 33 games so far over the past five World Cup appearances (1999-2015). There was some breathtaking victories to go with some disappointing losses but that they ended up winning three matches in past three events in a row, spoke a volume of how they found the cricket’s biggest carnival to their likings. With another World Cup approaching closer, the Cricfrenzy will take you down to the lane of the memory of Bangladesh’s past five World Cups. Here’s the fourth installment.

Expectation was sky high on Bangladesh as they came into the 2011 World Cup. They were not as consistent to win the match against big guns as they are now but during that period they were the team to reckon with. Bangladesh had beaten New Zealand and Zimbabwe at home and had lost only 1 of their last 11 games. Apart from that they also sealed their first ever away victory when they beat West Indies in both Test and ODI series. When the performance was a reason to be delighted, there was another thing in favour of Bangladesh that they were the co-host of the 2011 World Cup alongside India and Sri Lanka. And Bangladesh got the chance to play all the matches of their group at their home den. So Shakib Al Hasan led Bangladesh was expected to rock and move into the quarterfinal stage. But that was not to be, despite they won necessary number of matches to make them qualified for the last eight stage.

Bangladesh won three matches, including their maiden win against England but still couldn’t make the next round, vastly because of their ordinary performances in the rest of the three matches. What would hurt more them despite three victories under the belt was that they hit new low against West Indies and South Africa. They were shot out for 58 against West Indies, which still remains their lowest score in ODI cricket and 78 against South Africa.  And those two performances indeed cost them the quarterfinal stage.

Both England and West Indies won three matches like Bangladesh but they moved to the next round, because of good run rate. It leaves a permanent scratch in all Bangladesh cricketers’ heart that they came so close, yet they were so far in making the quarterfinal for the first time.

The team selection produced a debate ahead of the World Cup when Mashrafe Bin Mortaza, by far the best pacer of the country was ignored because of his injury. It was said by the time the World Cup would start, the pace spearhead will be okay but the then coach Jamie Siddons was not keen to take risk with Mashrafe and left him out. That sparked a widespread criticism but Siddons was adamant. It left Mashrafe breaking down to tears, which remains an ever-lasting picture in Bangladesh cricket’s history.

That Mashrafe came back strongly, led the side in elusive quarterfinal stage in 2015 World Cup and became the first captain of the country to lead the side in consecutive two World Cups. Mashrafe’s rise from the ashes is the most enduring story of the country’s cricket also.

However Bangladesh took on India in their first match of the 2011 World Cup, a team whom they beat and led their early exit from the 2007 World Cup thanks to a scintillating bowling performance from Mashrafe. But coming in the 2011 World Cup, India was in mood to take a revenge. Virender Sehwag hammered an epic 175 and Virat Kohli announced his arrival with an 83 ball-100 not out on his World Cup debut as India compiled 370. Bangladesh well thanks to Tamim Iqbal’s 70 before being all out in 283 and lost the match by 87 runs. India went on to win the World Cup after 28 years then.

Bangladesh were supposed to win against Ireland at ease. But the batsmen’s failure put Bangladesh in a position of an embarrassing defeat before which bowlers held their nerve to atone for the failures of their batsman, as the pluck of the Irish proved insufficient to overcome the most fervent atmosphere of the World Cup so far. In a gripping, low-scoring encounter at Mirpur, Bangladesh flirted with disaster as they squandered a flying start from Tamim Iqbal to crash to 205 all out, and when Ireland reached 93-3 at the halfway mark of their reply, they were well on course for a hugely deserved victory. However, six wickets for the Bangladeshi spin quartet set the stage for a flying finish from Shafiul Islam, who claimed 4-21 in eight hostile and reverse-swinging overs, to seal a wildly acclaimed victory by 27 runs with five overs to spare. Shafiul’s performance still remains the best bowling record of Bangladesh in World Cup.

Then came that horrible match against West Indies. Batting first Bangladesh were skittled out for 58, with only Junaid Siddique (25) and Mohammad Ashraful (11) reaching the double mark. Suliman Benn took four while Kemar Roach and Darren Sammy claimed three apiece to scythe down the Bangladesh at their home of cricket—Sher-e-Bangla National Cricket Stadium. West Indies won the match by nine wickets, getting to the winning mark in just 12.2 overs.

But they didn’t let the shambolic performance to grip them. After being all out for just 58 runs against West Indies, their lowest total in ODI, and conceded a nine-wicket defeat Bangladesh were in embarrassing position. The tense two-wicket victory over England however calmed the heated situation at home. It was indeed a bad-tempered match. England captain Andrew Strauss had to drag his off-spinner Graeme Swann away from an ugly confrontation with the home side's captain Shakib Al Hasan, while TV commentator David Lloyd apologised to viewers when a burst of foul language aimed at umpire Daryl Harper was picked up by the stump mic. England's mood picked up as the Bangladesh, set 226 to win, slipped to 169 for eight as a capacity 18,000 crowd began to drift away at Zahur Ahmed Chowdhury Stadium in Chittagong. But just when you thought England's World Cup could not get any more tortuous, Mahmudullah Ryad and No 10 Shafiul Islam added 57 for the ninth wicket to see the co-hosts home to seal a thrilling two-wicket victory with an over to spare.

Bangladesh raised a prospect of breaking group phase for the successive second time when they beat Netherlands by six wickets. Bangladesh achieved their primary goal of a solid win over Netherlands by bowling visitors out for just 160 runs who had elected to bat and then shed off their target with more than eight overs remaining. Netherlands had had an okay beginning but middle order failed to negotiate spinners with the exception of Ryan ten Doeschate who made a half century and was left unbeaten at other end when all his mates came and went. Imrul Kayes struck a well-composed 73 not out to sail the team home and whole Bangladesh were expecting a quarterfinal berth.

But Bangladesh squandered the golden opportunity by being all-out for 78 against South Africa to loss the match by 206 runs. Therefore they finish the tournament at low key note.

Imrul Kayes was the highest scorer for Bangladesh in that World Cup with 188 runs in six matches while Tamim Iqbal made 157 from same number of matches. Shakib Al Hasan (157) and Junaid Siddique (114) were the other two batsmen to have scored over 100. In bowling Shakib was the highest wicket-taker with eight scalps while Abdur Razzak took seven.

Had they not bowled out below 100 and conceded those two big defeats, Bangladesh certainly could seal the quarterfinal spot in that World Cup. And to be precise, given their performances they were not the team to be bowled out below 100. But still the 2011 event will go down in country’s cricket history as one of the worst World Cup for Bangladesh.