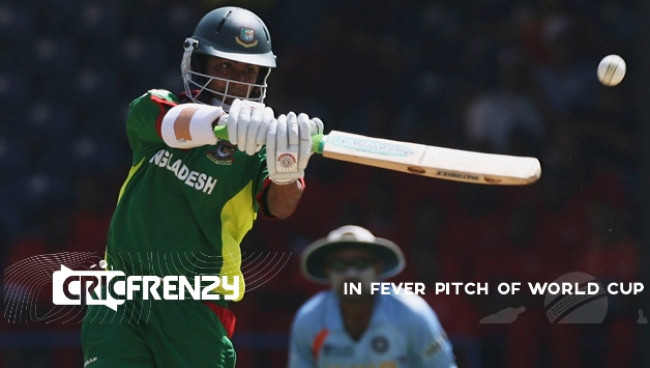 Bangladesh won 11 matches after playing 33 games so far over the past five World Cup appearances (1999-2015). There was some breathtaking victories to go with some disappointing losses but that they ended up winning three matches in past three events in a row, spoke a volume of how they found the cricket’s biggest carnival to their likings. With another World Cup approaching closer, the Cricfrenzy will take you down to the lane of the memory of Bangladesh’s past five World Cups. Here’s the third installment.

The disastrous 2003 World Cup was a massive learning curve for Bangladesh. The country’s cricket saw wholesale changes after that nightmare. While the coaching staffs were changed immediately, there was change in core group of players also. Bangladesh indeed leaned to young players, mostly from academy and aged level players to erase the nightmare of 2003 World Cup. And that was masterstroke. Those young guns now are ruling Bangladesh cricket.

Dav Whatmore who coached Sri Lanka to win the 1996 World Cup was appointed as the coach of Bangladesh while Habibul Bashar Sumon was given the captaincy responsibility. Their chemistry worked like magic. Under the tutelage of Whatmore Bangladesh basically broke the jinx of perpetual defeat trend and learnt how to win the match against big teams. Still they were not as consistent as they are in now but victory against top teams was coming occasionally. The most memorable victory was against India and all conquering Australia, came in 2004 and 2005 respectively, giving Bangladesh the belief that they are capable of beating top teams.

By the time when Bangladesh came into 2007 World Cup, Mohammad Ashraful, Abdur Razzak and Mashrafe Bin Mortaza had already established them as the linchpin of the team. Some young players like Shakib Al Hasan, Tamim Iqbal and Mushfiqur Rahim came into the side on the back of their good performance in the aged level cricket. Bangladesh looked a team oozing with confidence because of their 10-match winning streak at a stretch, even though all of the victories came against teams like Zimbabwe and Kenya.

Bangladesh’ first match’s was against India in 2007 World Cup. Mashrafe said, there was sense of belief in the dressing room that they could beat India.

“Where the belief came I didn’t know. But all of us surprisingly started believing at the same time that we would beat India and went to the Super Eight phase,” Mashrafe said.

The day before the crucial match against India, Bangladesh got the death news of Manzarul Islam Rana, a national cricketer who also was a close friend of Mashrafe. The news left the whole team grief-stricken but made them determined to dedicate something for Rana and they assumed nothing other than a victory against India could be more worthy to dedicate to Rana.

And then the epic victory scripted. Someone could be tempted to call one of the biggest upsets but the manner in which Bangladesh outclassed India at Port-of-Spain, came with a touch of the inevitable. Mashrafe Bin Mortaza laid the platform of the victory, bowling sensationally before the youth brigades put up an audacious cricket to turn a tricky chase into stroll, winning by five wickets.

Mashrafe’s 4-38 helped Bangladesh restrict India 191 and then the mighty sub-continent neighbour India were upstaged by a trio—Shakib, Tamim and Mushfiqur that has a combined experience of 35 games and an average age of 18.

Tamim Iqbal, the youngest member of the side and in just his fifth one-dayer, led the charge with an audacious 53-ball 51, oozing confidence from every pore and charging the fast bowlers with gusto. What followed was a clinical finish, led by Shakib Al Hasan (53) and Mushfiqur Rahim (56 not out), two batsmen widely touted as the stars of the next generation. Their 84-run stand - laced with cool and class - clinched the victory. With nine deliveries left, Mushfiqur caressed Munaf Patel through the covers to trigger off joyous celebrations at the Queens Park Oval.

Bangladesh’s next match was against Sri Lanka and they lost it miserably, being all out for 112 in 37 overs, after the Lankans posted a massive 318-4. The match was rain-curtailed, meaning Sri Lanka won by 198 runs by D/L method.

With India also losing to Sri Lanka, Bangladesh knew a victory against Barmuda would take them to the next level. And the expectation was realistic given the Barmuda was just an ICC associate and no match for the Tigers.

Bangladesh duly did that to knock out India from the group stage despite the rain interrupted the progress of the match as they beat Barmuda by seven wickets by D/L method. With the victory Bangladesh progressed beyond the opening round for the first time after reaching a revised target of 96 with 21 balls to spare. Bermuda had scored 94 for nine in a match reduced to 21-overs-a-side.

Having been favorites to win the match, Bangladesh skipper Habibul Bashar admitted the celebrations had been rather low key. "It is not like India (when we were overjoyed), we are more relieved now," he said.

Being runners-up for the Group B, Bangladesh reached Super Eight, which was the system of then World Cup. Two teams from the four groups made it to the Super Eight. In Super Eight Bangladesh were not expected to win any match except Ireland, who knocked out Pakistan, Zimbabwe from Group D to make it Super Eight along with West Indies.

Bangladesh however made a disastrous start to the Super Eight phase, losing Australia and New Zealand by 10 and 9 wickets respectively before producing one of the biggest upset in the World Cup cricket history, beating South Africa by 67 runs in an extraordinary Super 8 match in Guyana. The Tigers amassed a brilliant 251-8, their highest ever World Cup score till that time, with Mohammad Ashraful hitting a truly magnificent 87 from 83 balls.

Bangladesh’ bowling was tight and clever and their fielding was electric - with wicket-keeper Mushfiqur Rahim providing a constant running commentary of events. South Africa were bundled out for 184 in 48.4 overs with Abdur Razzak, claiming 3-25.

Expectation was sky-high afterwards but Bangladesh lost to England by four wickets after showing a good fight before they conceded shocking 74-run loss to Ireland. After winning against India and South Africa, the defeat was truly shocking for the crazy fans. Bangladesh ended their Super Eight mission with 99-run loss to West Indies. A win against Ireland could have made it more memorable but their achievement in that World Cup made it a tournament to remember.

The 2007 World Cup gave birth to Bangladesh’s three genius—Tamim Iqbal, Shakib Al Hasan and Mushfiqur Rahim who went to establish them the finest cricketers ever the country has produced and are now the backbone of the team.

The 2007 World Cup also was the prelude to the success of what Bangladesh achieved now.