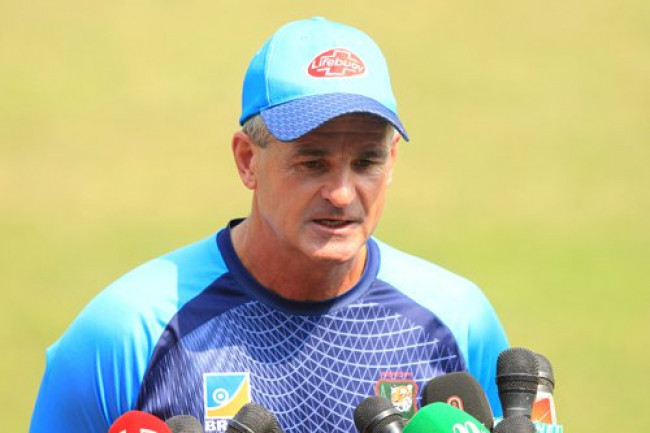 Bangladesh head coach Steve Rhodes insisted that clinching their maiden multi-nation tournament in Ireland indicates the depth of their strength as they achieved the feat on the back players outside of their most experienced five. Bangladesh have shown tremendous growth in the ODI format for quite some time and that is considered largely due to the contribution of the five seniors - Mashrafe Mortaza, Shakib Al Hasan, Tamim Iqbal, Mushfiqur Rahim and Mahmudullah. Rhodes spoke about various issues with Cricfrenzy after their historic multi-nation tournament.

Here are the excerpts:

CF : How was the win considering it came after six attempts? It helped to cross the mental block that was required to win in the final?

Steve Rhodes : I think, possibly. But, I don’t know why they think that way. I think the press think that way. Its get written about and they might read it. I think they are getting more and more confident about playing in the final. I have lost only final with Bangladesh in the Asia cup final and they lost the match in the last ball. This was quite an amazing chase today because it was tough and there have been two or three guys who have played special innings today. What it does today, if you think of Mosaddek for example, he is a guy now who is gonna keep everybody on his toes. That’s the depth of the squad and he might not play and if he doesn’t then what a great position we have some other good players playing, what it does give that it gives us the confidence that we can win some big games as well.

CF:How do you evaluate Soumya and Mosaddek batting?

Steve Rhodes : No, first of all with Soumya he has been a revolution. Since he hit that hundred and double hundred in the DPL but he also gets some rough days from people because he is a type of guy when he is inform he is really hot. So, its just nice to see him carrying on that form and I hope people would get of his back a little bit because he is a wonderful player. We support him and back him. But not everyone always does that. And with mosaddek , will he play or wont he play, how will they handle it. It’s a difficult situation. One player is playing well but cant get in the conversation is that I am really sorry, you know you are playing so well but we must have some good players if you don’t play. That means Bangladesh are stronger within the squad and that’s what we want. We want more depth. If we get that depth then people to stop talking about the big five. That means we will be stronger when we are missing few of them. today shakib didn’t play and he had a fantastic tournament. Great knick with bat, ball and in the field. So, win without him having been in good knick is a big effort.

CF : Is bowling an area of concern?

Steve Rhodes : No, not really. I think it was a very good wicket and fast outfield, we had only couple of foul balls early. There were some great shots particularly from shai hope and he is particular had a different attitude to his batting. he went to attack a bit more. Played some great shots against Saifuddin in good balls. So, I think they realized that shouldn’t be just pushing around as a tactic, it was tough for our guys out there because the condition suited batting. With the amount of runs scored per over, I don’t think we necessarily bowled bad at all, it was just tough day. But you are right doing well in the world cup means we have to bat and bowl well and field well. And certainly with the ball I am happy with the variety that we have got when you look at Mash,Saifuddin and Fizz as seamers and these three are in particular are very different. And the spinners have also done great out here, likes of Shakib and Miraz and now we have others come in like Rahi with five wickets, Rubel back to playing. So, we have plenty of depth in our bowling but also we have variety which is important.

CF:How difficult it was to exclude Rahi despite his five wicket haul in the previous game?

Steve Rhodes: No no. just what I have said about the batters, I said in the team meeting that you have 14 names that we haven’t included in the team. We are not including the guy who have got five wickets. Its obviously hard for him. That means the guys who are in that squad are excellent players. And he takes that sort of thing on his chin like most of the squad do. They realize we are a squad not just the team or eleven or individual. They understand that sometimes they have to make way because there are some other good player playing.

CF:What are the positives you are taking?

Steve Rhodes:I think we have done some really good stuff but the batting has been really good. And its been consistent and you have seen in our batting order that didn’t have Shakib. So we decided to change one position instead of changing several positions. Because we want the consistency with people knowing when they are batting. and the likes of Mushi was in four , Mithun five, Riad six. That gives us some consistency knowing that they are gonna be successful in that type of role because that’s the role that we have given them  and they understand how to do them too.