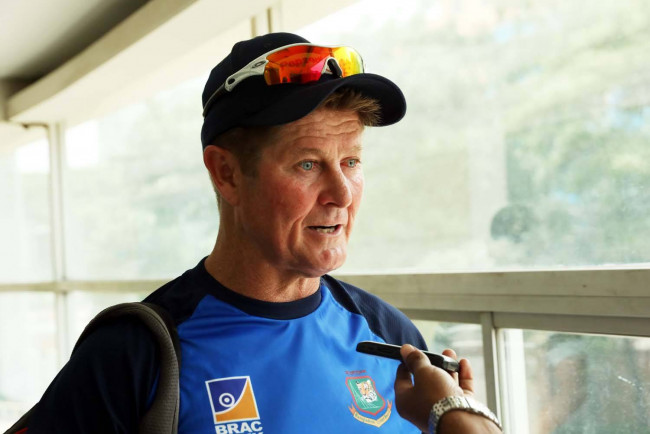 Bangladesh Under-19 fielding consultant Trevor Penny spoke at length with Cricfrenzy regarding the advancement of fielding and how important it is to get away from traditional fielding drills.

Penny, the Warwickshire stalwart for 17 years, Penney retired from first-class cricket at the end of the 2005 season to take up a post as Sri Lanka's assistant coach, where he teamed up with his former county team-mate, Tom Moody and later took as the interim head coach while his association with Indian team during the Duncan Fletcher era is known to be extremely fruitful as far turning the Indian side into a goof fielding unit. Penny believes techniques are more important than anything else to improve a fielding unit.

Here are the excerpts...

C.F: How do you see the approach of our Under-19 squad?

Trevor Penny: It has been brilliant, we had two good sessions. The atmosphere, the way they come about, giving their hundred percent and wanting to improve all the time is just amazing. I have in Bangladesh so many times and seen the enthusiasm for cricket. So, it doesn’t surprise me. It has been a really good start and a great few days.

C.F: There is conception that Asian countries fielding unit lacks the firepower compared to other cricketing nation.

Trevor Penny: I think 10 or 20 years ago that was applicable but I don’t think it’s the case anymore. I have been in for Sri Lanka three years, India for four years in IPL. Now I see there is no difference. Yes, there are few brilliant fielders like AB de Villiars. But in general fielding is pretty even. So, I think sub-continent teams have really improved their fielding and there is much no difference anymore.

C.F: What is the biggest plus point of this Under-19 squad and where do you think they need to improve?

Trevor Penny: I think the group that I saw today has good potential. Its just few small things, that’s why I am glad that I will be here for two weeks,   Just on try to improve on few techniques.  Fielding is sometimes forgotten that it requires techniques. Everyone just do fielding practice, if you don’t change your techniques then you can’t approve no matter how much you practice. If don’t do it the right way you can’t get better. So, it has been great. These guys are like little sponges they just want to learn and improve.  I love that. When you come here with the young stars, they just wanna get better.

C.F: Do you feel traditional fielding drills are getting obsolete these days?

Trevor Penny: I just think the technical part is forgotten about a lot, some coaches just go about hit catches or just say no bad throw but they never try to find out why.  There is often a reason that why they have done it and over the years I have been doing it a lot now with the team, I try to find out the reasons.  And I practice slowly. You need to go back to school almost, like kindergarten and change things. Once they get it then I go fast again. It’s not just about bang-bang and hitting. Because you can just do that with Dilshan or Jonty Rhodes. They had it already but with basic normal cricketers and average fielders you have to really change that technique.

C.F: After two weeks you will be leaving. What is your next course of action?

Trevor Penny: I am a consultant coach these days.  I stopped working for the Netherlands cricket team,  I do contracts around the world, I look for T20 jobs around the world. I am hoping to be in Canadian T20 league (CPL), I am coming back here in December to help the U19 team get prepared for the world cup. I won’t be there [in the Under-19 World Cup] but I am hoping to come back just before they leave. So, I can give them another two weeks of boost up you know.

C.F: Do you feel two week is good enough?

Trevor Penny: I think the coaches here have seen what I am trying to do and the players need to continue that work. You just can’t do something for two weeks, you have to take it all the way, that’s what life is all about. And get better at that. Hopefully they will do that because it seems like they are eager to learn. This weeks are all about fielding while I will be leaving a program for them when I leave after completing the stint.

C.F: How do you motivate yourself as a fielding coach?

Trevor Penny: I just don’t do fielding, I have been lucky, I have been the head coach of Sri Lanka,  its new for me. Normally I work as a consulting coach now.  And it's nice because you can do a bit of everything.