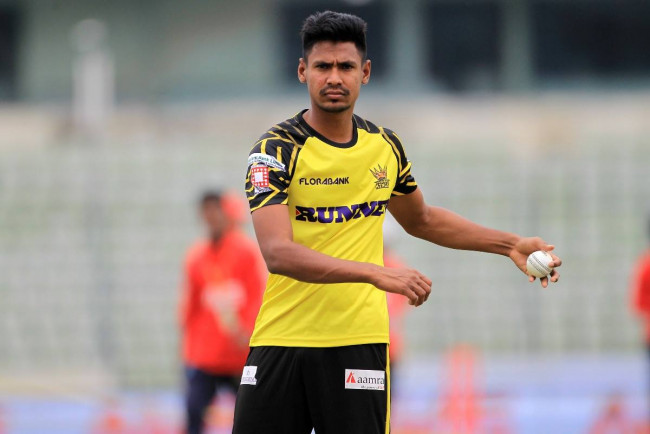 Shinepukur acquired him in DPL players draft from Category A+. Afif Hossain, the captain of Shinepukur confirmed the news, saying the pacer, popularly dubbed as ‘Cutter Master’ will play his first match in this season’s DPL as his side eyes to seal the Super League spot.

“He will play tomorrow’s game against Gazi Group,’’ said Shinepukur’s Afif Hossain adding that they are looking forward to his inclusion.

‘’We hope he will show what he is capable of,” he added.

Shinepukur with 9 points from 9 games remains a strong contender of moving into the Super League phase.

If Mustafizur plays the match, this will be his first game in the Dhaka League since 2015. In between he couldn’t take part in the league due to various injuries and International commitments.

Mustafizur however was seen practicing with the team at the National Academy Ground since returning from his home town Sathkhira that indicates that he is keen to play the game.

The DPL however will be a platform for him to have a match practice ahead of the tri-nation series in Ireland and ICC Cricket World Cup.

Mustafizur however didn’t play any competitive cricket since Bangladesh’s series against New Zealand.

He made debut in DPL In 2014-15. In his debut match, playing for Abahani Limited he claimed 5-32 against Kalabagan Krira Chakra to show his mettle.

He later made debut for National team in that season and became an instant sensation with 5-50 that helped Bangladesh won the match against India and subsequent the three-match series against mighty neighbour for the first time.

The Bangladesh pace spearhead so far has played 48 List A matches in which he snapped up 89 wicket at an average of 20.37.